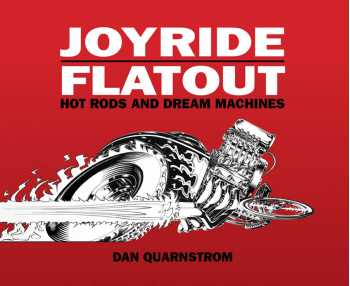 During the 1960s, out-of-this-world automobiles took America by storm, care of pioneering custom car designers like Ed "Big Daddy" Roth and George Barris, whose dazzling chrome creations--each with its own name and personality--captured the hopes and dreams of thousands of youth ready for their first joyride.

Simultaneously, the music world was getting its own punch of adrenalin with Chuck Berry, the Beach Boys, and Dick Dale providing the perfect soundtrack for a time when experimentation was the order of the day. The counterculture that emerged was one of pure innovation--hot rods, MAD Magazine, Rat Fink, Von Dutch, Robert Williams, Stanley Mouse. Never before or since has there been a time when the border between imagination and engineered physical reality was crossed with such boundless, almost reckless regularity.

Joyride/Flatout: Hot Rods and Dream Machines is a tribute to this formative time through the eyes of author and designer Dan Quarnstrom, whose love of hot rod culture, and those who were a part of it, is as fresh and contagious as it was more than 50 years ago, when he was a young boy attending his first hot rod show. From thumbnail sketches to finished drawings, Post-it squiggles to thorough model breakdowns, Joyride/Flatout is a testament to what can happen when you hold onto your enthusiasm and infuse it into everything you create.