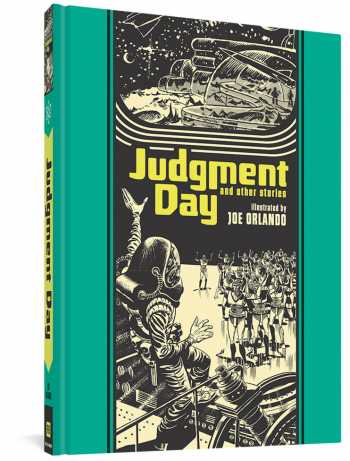 Joe Orlando was a mainstay at EC, especially on science fiction, and this collects 23 of his best SF stories. All of them, most scripted by Al Feldstein, serve up classic O. Henry-style endings, such as "I, Robot," and "Fallen Idol." The title story is one of EC's most famous, with its blunt anti-racism message. When it was printed during the era of the Comics Code, publisher Bill Gaines and Feldstein had to fight to keep the story's final panel "reveal" (and thus its whole point) intact. It was a Pyrrhic victory, however, as "Judgment Day" became the last story in the last comic book EC published. This volume also features two of Orlando's outstanding adaptations of classic Ray Bradbury science fiction stories: "The Long Year" and "Outcast of the Stars." Also included are all of EC's "Adam Link" adaptations.

"If you're not familiar with [Joe Orlando's] magnificent EC art, do yourself a favor and order [Judgment Day and Other Stories]. Joe was a deserved member of comics' Hall of Fame for his work as an artist, editor, teacher and industry leader...and mentor to so many of us." --Paul Levitz

Joe Orlando (1927-1998; Will Eisner Hall of Fame, 2007) was a prolific illustrator, writer, editor, and cartoonist who rose from artist at EC Comics to vice president at DC Comics.