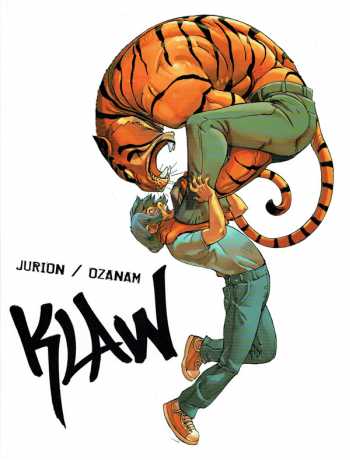 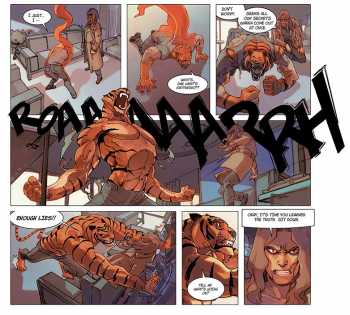 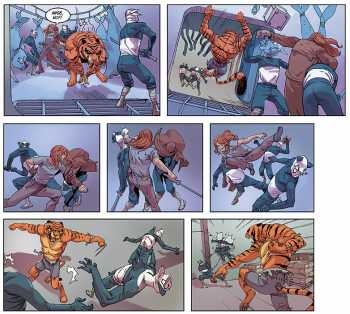 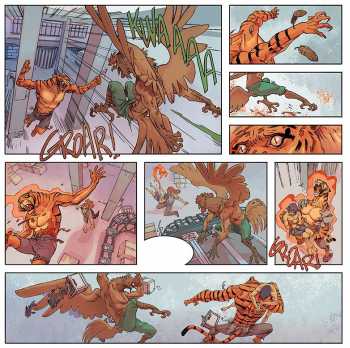 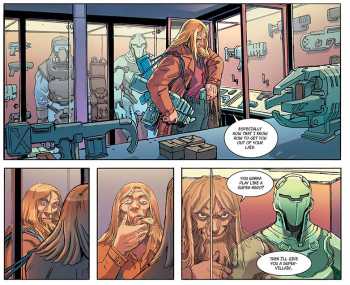 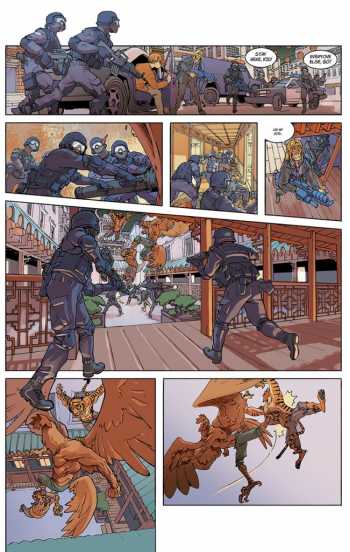 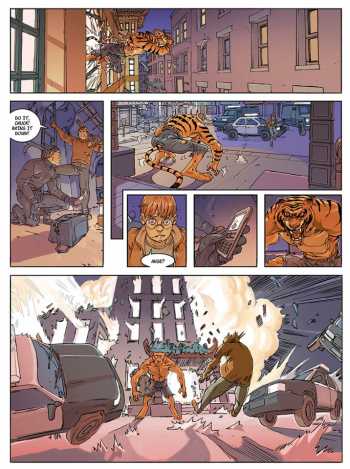 A population of secret were-animals hide among us, and young Angel Tomassini is about to learn just how widespread -- and dangerous -- it is!

Beautifully illustrated by Joel Jurion, best known throughout Europe and the worldwide animation industry for his gorgeous and dynamic character design, written by Antoine Ozenam, this exciting young adult series explores a world of ancient conflict hiding just under the surface of modern life as we know it.

With identifiable coming of age themes overshadowed by thrilling action sequences and a deep, enthralling mythology, this book will introduce readers to a world unlike anything else on shelves today. Collecting the first three chapters of this original ongoing series -- AWAKENING, TABULA RASA, and UNIONS -- this book comprises "THE FIRST CYCLE" in the epic, hidden universe of KLAW!***

Teenager Angel Tomassini has been hiding a dark and scary secret: when threatened he involuntarily turns into a violent and vicious were-tiger. He doesn't know why, how, or what to do, because when he transforms, he loses control and people end up badly hurt. As if this isn't enough for a kid to deal with, Angel is slowly learning his father is one of the biggest organized crime leaders in the city. And there are more were-animals like Angel different creatures tooThis wildly world-popular comic series about secret wars between clans of ancient, mythic were-animals is collected for the first time in a new hardcover edition containing the entire first cycle of the series in a single gorgeous volume.***

No one ever said High School was easy. We've all experienced the anxiety of exams, popularity contests, bullies, crushes, and that awkward phase where your very own body is changing out of your control. For Angel Tomassini, however, those changes are unlike anything his peers can identify with he's starting to realize he may be a wild were-tiger! Add that to the many stresses in his life already, and its enough to drive him crazy!This thrilling Young Adult series blends the thrills and excitement of a dozen different genres, from supernatural monster battles to inner-city organized crime, evolving in style as the series progresses. As young Angel matures, learning to live with his newfound abilities, so too does the drama, with a gradual, exciting shift from High School fantasy to gangland conspiracy to a lone-wolf tale of survival.Containing the first three chapters in the wildly popular series, this book reads like a fantastic, engrosing ongoing TV series, with each chapter containing what could be the arc of a single television season.

The epic nature of this thrilling universe is filled with mysteries that unfold piece by piece over time, drawing Angel deeper into an age-old war between the various "Dizhi" powerful spirits based on an ancient collection of totems that can posess and empower those deemed worthy. Not only must he survive the rivalry between the Dizhi, but the government forces that would see them all destroyedAbout the creators:Joël Jurion  illustratorJoël Jurion was born in France in 1975, with a penchant for doodling his entire life. He began creating comics in 1999, illustrating Thierry Calleteau's ANACHRON, a series that ran for six successful years. Hot on the heels of that project, he began a new series with writer Steve Baker called THE DEMONS OF DUNWICH.

But his most popular series, without a doubt, has been KLAW with Antoine Ozanam and colorist Yoann Guille.Aside from this comic work, he also spends a lot of time designing and storyboarding for the animation and video game industries, including work on the upcoming CG feature film "BALLERINA."Antoine Ozanam  writerAntoine Ozanam was born in Rouen before his family reolcated to the Paris suburbs, where he consisted on a steady diet of comic books and alternative music. After studying visual communication, he designed movie posters, music videos, CDs, and eventually websites before releasing his first original graphic novel "HOTEL NOIR," a nod to classic character types. In 2004, he decided to become a full-time comic writer, and he hasn't slowed down since, having written or created well over 30 titles.He now lives in the city of Angoulême with his family, where he continues to write the ongoing saga of KLAW.