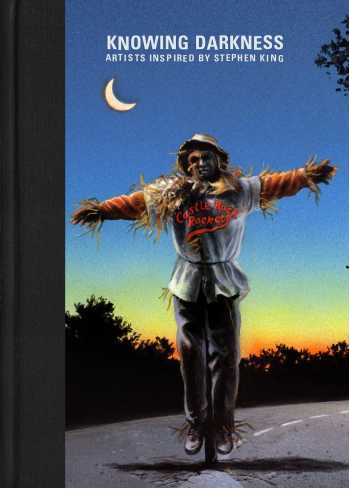 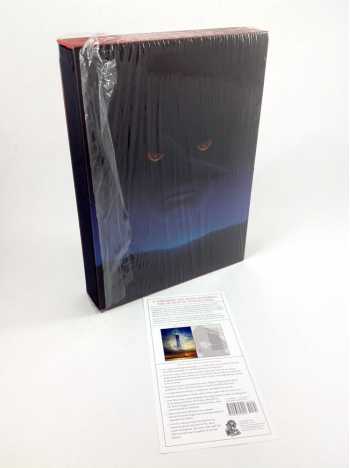 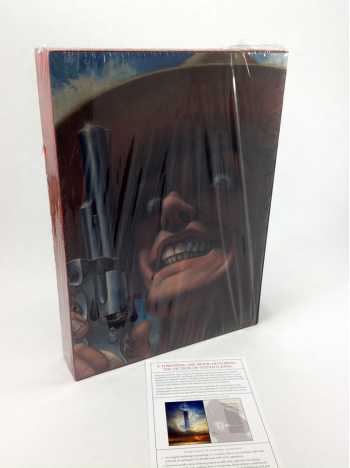 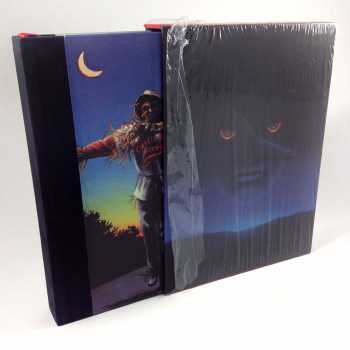 The slipcase has a very tiny bump to the upper corner (on The Stand side), but the rest of the slipcase and the book inside is perfect. The shrinkwrap is opened to examine the book, but still surrounds the slipcase.

A towering art book showcasing the fiction of Stephen King, Knowing Darkness: Artists Inspired by Stephen King is the most complete compilation of artwork -- previously published and also new pieces commissioned especially for this book -- of his fiction. Spanning 35 years, from Carrie to Under the Dome, this book draws together artwork that appeared in limited editions (virtually all out of print), trade editions (again, many out of print), book club editions, movie tie-in editions, and other sources.

The book was specifically designed to showcase the artwork, which means it was shot from the original art, or new scans, or computer files provided by the artists themselves or from the publishers' files. Unlike the art when printed, for a paperback cover or dust jacket for a hardback, there is no overprinting to obscure the artwork itself: what you see is what the artist intended, in large scale, scupulously reproduced, on heavy, coated stock designed to bring out every nuance, every brushstroke, every stroke of the pen.

The text is written by Stephen King expert George Beahm, who has written several books about King, his life, and his fiction. A longtime collector of fantasy art, Beahm conducted dozens of interviews, many in person, with Michael Whelan, Bernie Wrightson, Drew Struzan, and others.

The book is 11 x 15 inches, and is 448 pages. The book is printed in full color. It is a sturdily bound hardback book with matching slipcase that will last your lifetime, and beyond.

Over 600 works, most printed in full color, which include 24 full-color double-page fold-outs of artwork, including newlly commissioned pieces and previously published artwork that can be seen the way the artist intended. See, for instance, Michael Whelan's magnificent wraparound cover for the Phantasia Press edition of Firestarter, printed 22 x 15 inches, in gorgeous color!

The introduction to the book was written by film director Frank Darabont, whose credits include The Shawshank Redemption, The Green Mile, and The Mist.

Very Fine in a Fine slipcase (the book is As New, but the slipcase has a very tiny bump to the upper corner)
Limited to 1500 copies