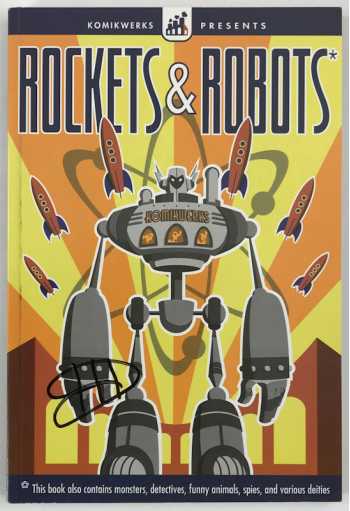 Komikwerks Presents: Rockets & Robots is the newest comics anthology collection from Komikwerks, which features creator-owned short stories from such comic pros as Keith Giffen, who co-created and wrote 3 of the 14 stories in the book.

"I know what you're thinking," says Patrick Coyle, Komikwerks co-founder and writer/creator of Bixby Grant, Private Eye, "You're thinking 'what if I don't like rockets OR robots? What does this book offer me?' And the answer to that is 'Plenty!' In addition to some sci-fi stories, Rockets and Robots has horror, action, humor, kung fu, and tons of other stuff  it's like all the Komikwerks anthologies, there's something in there for everyone!"