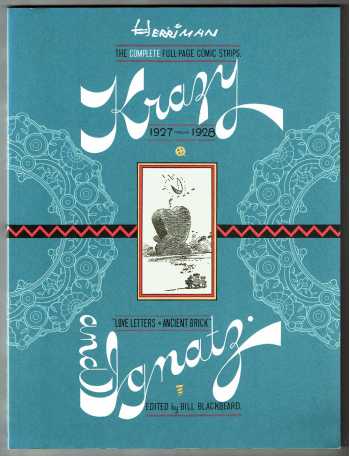 Now in a later printing, this is a first printing in pristine condition.

This volume is the second of a long-term plan to chronologically reprint strips from the prime of Herriman's career, most of which have not seen print since originally running in newspapers 75 years ago. Each volume is edited by the San Francisco Cartoon Art Museum's Bill Blackbeard, the world's foremost authority on early 20th Century American comic strips, and designed by Jimmy Corrigan author Chris Ware, who may well go down as the best cartoonist of the 21st Century. In addition to the 104 full-page black-and-white Sunday strips from 1927 and 1928 (Herriman did not use color until 1935), the book includes introductions by Blackbeard, vaudeville historian Ben Schwartz and reproductions of rare Herriman ephemera from Ware's own extensive collection, as well as annotations and other notes by Ware and Blackbeard. Krazy Kat is a love story, focusing on the relationships of its three main characters. Krazy Kat adored Ignatz Mouse. Ignatz Mouse just tolerated Krazy Kat, except for recurrent onsets of targeting tumescence, which found expression in the fast delivery of bricks to Krazy's cranium. Offisa Pup loved Krazy and sought to protect "her" (Herriman always maintained that Krazy was genderless) by throwing Ignatz in jail. Each of the characters was ignorant of the others' true motivations, and this simple structure allowed Herriman to build entire worlds of meaning into the actions, building thematic depth and sweeping his readers up by the looping verbal rhythms of Krazy & Co.'s unique dialogue.

"The Krazy & Ignatz books have been a godsend to comics fans... Each book is bizarre, sweetly amusing, and blissfully continuity-free."  "The Best Comics of the '00s: The Archives," The A.V. Club
"One could argue the claim, confidently, persuasively, and with an all-but-inexhaustible store of ever-fresh evidence, that George Herriman was one of the very great artists, in any medium, of the 20th century."  Michael Chabon
"Krazy Kat is something way better than the greatest strip; it's a milestone of 20th century visionary art... George Herriman was one of those godsent popular artists like Chaplin, Armstrong, Hitchcock and Dylan whose low art makes mincemeat of the high. Geez, this stuff is wonderful."  Tom DeHaven
2003 Eisner Award winner, Best Archival Collection/Project
2003 Harvey Award Winner, Special Award for Excellence in Presentation
2003 Harvey Award Winner, Best Domestic Reprint Project