Sign in | Register
HomeNew ArrivalsKrazy Kat, A Celebration of Sundays 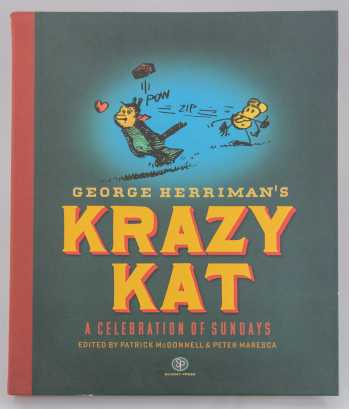 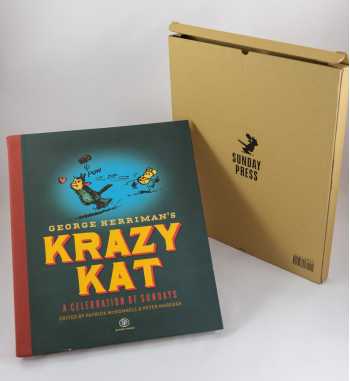 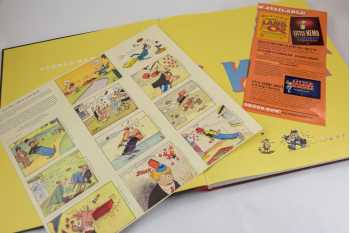 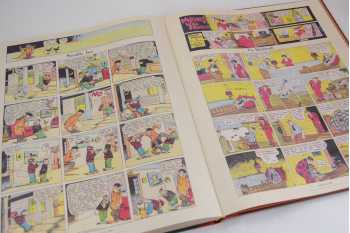 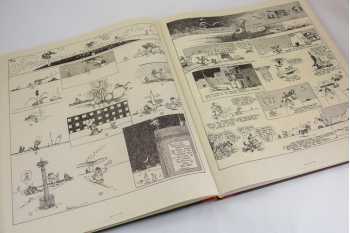 A Centennial Celebration! Finally, Krazy Kat as it was meant to be seen. 135 full-size Sunday pages from 1916-1944 -- plus dozens more early comics from George Herriman.

It's the eternal triangle of the comics -- Kat, Mouse, and Pupp, along with the catalytic brick. Here are their glorious, poignant, and hilarious stories from the genius of George Herriman, reprinted for the first time in their original size and colors. Included in the 14 x 17-inch collection is a sampling of all Herriman's creations for the Sunday newspaper comics from 1901-1906: Professor Otto, The Two Jackies, Major Ozone, and more, many of which have never been reprinted before.

Now, 100 years after Ignatz tossed his first brick, step back in time to delight in the timeless tales of America's great comic strip artist and his greatest creation, Krazy Kat.

Once Mouse began tossing Brick at Kat in 1910, newspaper readers across the U.S. were treated to a quality of humor, art, and poetry that had not been seen before in any medium, much less a comic strip! For this 100th anniversary, Sunday Press celebrates with a collection of magnificent Sunday comics by creator George Herriman. Both black-and-white and color Sunday pages are reprinted in the original size, with the colors and textures (and flaws) that were seen by millions every week in American newspapers. All have been restored to eliminate tears, stains, and other defects caused by time and neglect. Much of the "yellowing" of age has been corrected, but many of the ink smudges, bare spots, and bleed-though lines remain, all part of the original readers' experience.

The early Sundays were printed only in black and white, as they appeared not in the comics section, but on a features page, in a non-color section of the newspaper that included articles or editorial cartoons commenting on art, lifestyle, or news events of the day. This may seem a misplacement, in that Krazy Kat was indeed a comic and, with few exceptions, had little to do with current affairs in news, culture, or society. But in many ways it was correctly positioned outside the comics section; it was marketed as "high art" and, however metaphorically, reflected and commented upon the human condition. In early 1922, Hearst's New York American briefly experimented with a Saturday color comics section that included a full, broadsheet-size Krazy Kat page. Then from 1935 to 1944, the denizens of Coconino County appeared in a tabloid-size comic section in only a handful of American cities: New York, Los Angeles, Chicago, and later, Baltimore. These full-color comics were found in a Saturday comics section, or in a second Sunday section supplementing the regular full-size comics.

This Sunday Press collection presents examples of all three iterations of Krazy Kat. The format of the book is laid out to match the unique size of the first, black-and-white pages, while the more standard sized 1922 color pages have been reduced and the 1935-1944 tabloid color pages have been slightly enlarged (about 5%), all to give the book a consistent format. Specific pages appeared on different dates in different cities, and the color tabloid pages were often dated within a panel for the Saturday, not Sunday papers. Thus there may be a discrepancy in some of the dates assigned to the pages. Included here are the first and last Krazy Kat Sunday pages.

Presented here are the favorites of all involved in this project: editors, writers, and our many contributors. Some pages were selected for the innovative layouts, others for the striking artwork. And there's that incredible dialog and narration - a new language combining the dialects of the broad spectrum of American immigrants, seasoned with unique words and phrases born of the characters themselves.

The group of early Sundays at the end of the book offers the most interesting samples of each of the running characters created by Herriman, as well as a few "one-shots." We hope that long-time lovers of Krazy Kat will find their favorites here, while those less familiar with Herriman's work discover a more than worthwhile introduction to these marvelous pages. We trust that enjoying these comics in their 100-year-old format will become a "new" experience for all.