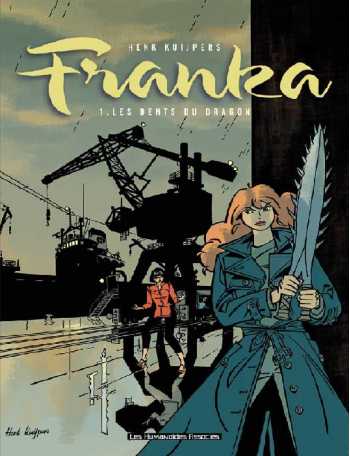 In "The Dragon's Teeth," the female detective comes into possession of an ancient oriental sword and is pursued by a female Chinese agent. Globetrotting adventures from Amsterdam to an English estate, Hong Kong, Venice, and the Philippines.
This is a new French edition of an album originally published in 1984 in Holland. This was the seventh album in the Franka series which started in 1978 and is still going strong with the 19th album released in 2006 and the 20th in preparation. The character design of Franka evolved over the years from a wide-eyed more cartoonish-proportioned figure to a more realistically proportioned, sexier heroine. This album features Franka about two-thirds of the way in her evolution - lots of fun cheesecake.