Sign in | Register
HomeAnimation & FilmA Nasty Piece Of Work: The Art And Graft Of Spitting Image
12 of 781 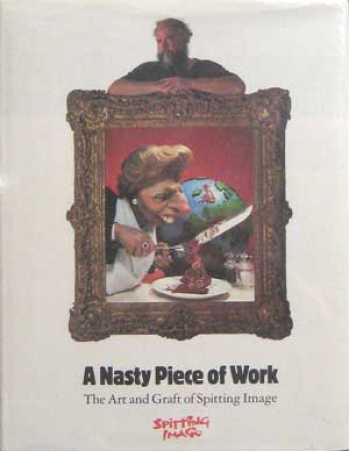 The British TV blog Broken-TV ranks this the number one book on the puppet comedy show Spitting Image: "Brilliant. A Nasty Piece Of Work is largely an autobiography of Spitting Image co-creator Roger Law, and doesn’t even get around to mentioning Spitting Image properly until chapter nine (or page 163, in case you’re assuming all the chapters are really small). This is a good thing, as up to that point the book looks at Roger Law’s earlier work, both on his own and alongside Peter Fluck."Even back in the early days, Law’s work made for interesting reading; his first nationally published work (in 1962) was a weekly collaboration with Peter Cook for The Observer. From there he moved on to providing illustrations for The Sunday Times Magazine, The New York Times Magazine, National Lampoon, Magnet News (Britain’s first black newspaper, despite Law not being black), album covers for Hendrix and The Who, as well as selling eggcups in the shape of royalty."Once the topic shifts to Spitting Image (as it does from page 163 onwards), there’s still a lot of interesting ground covered. The non-broadcast pilot of Spitting Image was hampered by the team spending ages on trying to get a robotic parrot (due to be perched on the shoulder of the Reagan puppet) working properly. Progress was only made once the android psittacine was scrapped for parts. Of further interest is the huge amount of behind the scenes information on offer, even going as far to include the storyboard for the title sequence of The Mary Whitehouse Experience (a Spitting Image production, you’ll remember), rough sketches for puppets and pieces on the largely unheralded artists who’d worked on the design of Spitting Image."