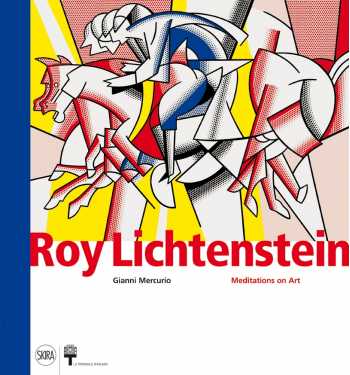 Roy Lichtenstein’s painting is almost an identifiable brand today and his influence is evident in many forms of artistic expression: painting, advertising, photography, design, fashion.

Published for the extensive Milan exhibition and curated by Gianni Mercurio, this catalogue analyses – for the first time – the works he created by appropriating images from the history of modern art.

The publication comprises more than 100 works, mainly large-scale paintings, drawings and sculptures, photographs, and short films dedicated to the artist held in significant public and private international collections, including the Ludwig Museum in Cologne, the Ludwig Forum in Aachen, the Louisiana Museum in Copenhagen, the Whitney Museum and the Guggenheim Museum in New York, the Moderner Kunst Museum in Vienna, and the Broad Art Foundation in Los Angeles.

There is a wide range of paintings with their preparatory drawings made by Lichtenstein from the 1950s to the 1990s and inspired by Cubism, Expressionism, Futurism, 1930s Modernism, minimalist abstraction, Action Painting, and landscape and still life genres.

His art was not mere ‘citationism’ or the desire to reinterpret the art of the past but is about the appropriation and transformation in a Pop way of forms of Greek architecture, Etruscan painting and the Baroque line.

The exhibition proposes a major re-reading of the following: Impressionism and expressionism, with their main exponents such as Monet, Matisse, and Nolde; Cubism with Picasso; Futurism; the Rationalism of Mondrian; and Surrealism.

The historic avant-garde movements in particular, which gave life to a new artistic course through a break with the past and which are now assimilated into ‘great art’, were in turn transformed to become an object of ironic and destabilising inquiry highlighting the cultural commercialisation and exploitation of high art.