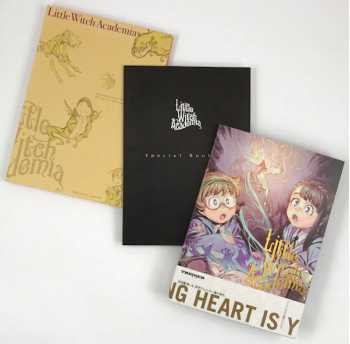 Akko Kagari is an ordinary girl who joins the renowned witch academy for witch girls, Luna Nova Academy. When she was younger, she went to Magical Festa, a magic show hosted by a witch named Shiny Chariot. Akko was so mesmerized and inspired by Shiny Chariot's performance that she dreamed to someday be a "cool" witch like her. This young and impressionable Akko takes Shiny Chariot's words as her own motto: "Never forget, a believing heart is your magic." As part of a class, Akko and her classmates go into a labyrinth under the Tower of Luna Nova. There, a sealed ancient dragon was unleashed by one of her classmates. Akko tries to stop the dragon, but...

TRIGGER, Inc., is an animation studio founded by former GAINAX employees Masahiko Otsuka and Hiroyuki Imaishi in August of 2011. "If an anime title is like a bullet, we would like to be the trigger that helps propel that bullet forward," said the founders of TRIGGER. They are best known for Inferno Cop, Little Witch Academia, and are now working on Kill la Kill, their first anime series for television.