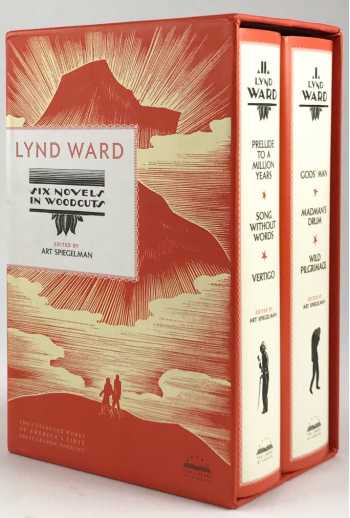 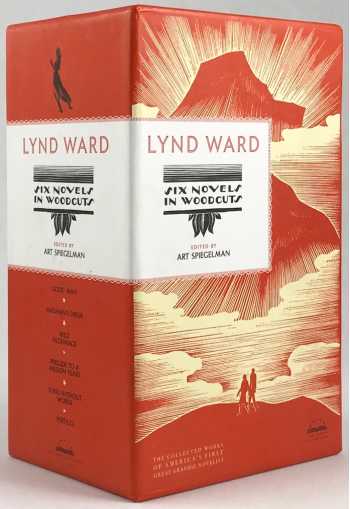 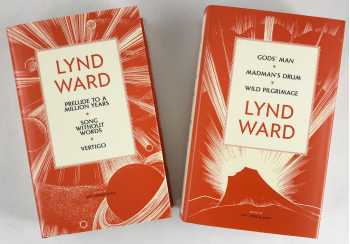 The first printing of this edition, now in later printings.

Six wordless novels, printed only on the recto (right-hand page) so that each image stands alone in the reader's field of view. Includes an introduction from Art Spiegelman ("Maus") and extensive essays from the artist.

From the eve of the Great Depression to the start of World War II, Lynd Ward (1905-1985) observed the troubled American scene through the double lens of a politically committed storyteller and a visionary graphic artist. His medium—the wordless "novel in woodcuts"—was his alone, and he quickly brought it from bold iconographic infancy to subtle and still unrivalled mastery.

Gods' Man (1929), the audaciously ambitious work that made Ward's reputation, is a modern morality play, an allegory of the deadly bargain a striving young artist often makes with life. Madman's Drum (1930), a multigenerational saga worthy of Faulkner, traces the legacy of violence haunting a family whose stock in trade is human souls. Wild Pilgrimage (1932), perhaps the most accomplished of these early books, is a study in the brutalization of an American factory worker whose heart can still respond to beauty but whose mind is twisted in rage against the system and its shackles.

Prelude to a Million Years (1933) is a dark meditation on art, inspiration, and the disparity between the ideal and the real. Song Without Words (1936), a protest against the rise of European fascism, asks if ours is a world still fit for the human soul. Vertigo (1937), Ward's undisputed masterpiece, is an epic novel on the theme of the individual caught in the downward spiral of a sinking American economy. Its characters include a young violinist, her luckless fiancé, and an elderly business magnate who—movingly, and without ever becoming a political caricature—embodies the social forces determining their fate.

The images reproduced in this volume are taken from prints pulled from the original woodblocks or first-generation electrotypes. The Library of America is proud to bring Ward's masterworks to a new generation of readers, together with nine illuminating essays about his craft, including those he wrote for the long out-of-print Storyteller Without Words, a 1974 retrospective. Art Spiegelman contributes an introductory essay, "Reading Pictures," that defines Ward's towering achievement in that most demanding of graphic-story forms, the wordless novel in woodcuts.