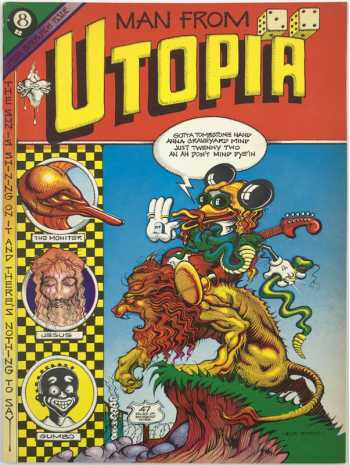 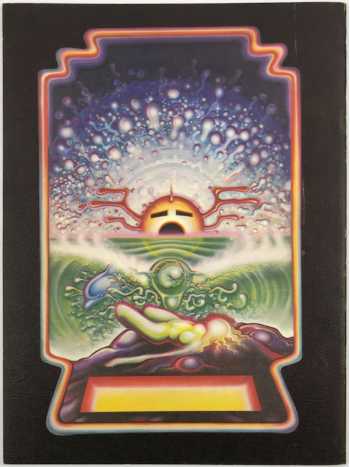 A big helping of Griffin's stream of consciousness comix.

The best description of this comic comes from M. Steven Fox at comixjoint.com:

One of the first major publications Griffin produced after his conversion to Christianity was Man from Utopia, an oversize, deluxe magazine which essentially presented a portfolio of his illustrations from 1970 to 1972. Man from Utopia reproduced work that Griffin had created for concert posters, album covers and his memorable poster for John Severson's surfing film, Pacific Vibrations (Severson was the founder of Surfer magazine). Despite the spot illustration of Jesus on the front cover art, Man from Utopia was one of the last publications Griffin produced that was not dominated by Christian imagery, though it is repeatedly punctuated by Christian symbols.

Man from Utopia is first and foremost a remarkable collection Griffin's most beautifully composed illustrations, which include recurring icons far removed from Christianity. Hearts, roses, pussies, light bulbs, aliens and skulls flourish throughout the book, embedded in Griffin's complex, sharp-edged ink lines. Despite the lack of a specific story or defined narrative in Man from Utopia, the drawings feel like they are thematically connected, delivering precious lessons for those who are patient enough to absorb the entire scope of their message.