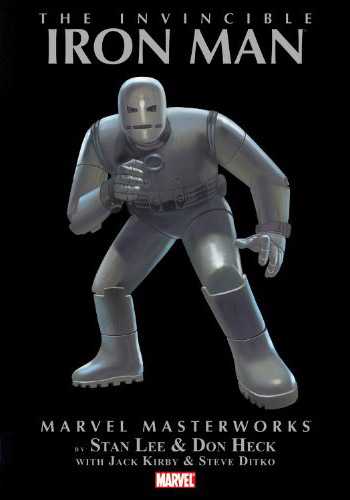 As the '60s unrolled, Stan Lee's Marvel released hit after revolutionary hit, bringing fresh new heroes to a public all too ready for amazing adventurers with feet of clay. And there are none that touch both that adventurer ideal and human reality like Tony Stark, the Invincible Iron Man! A jet-setter, playboy, and brilliant scientist, Stark is cut down to Earth when a battlefield explosion rips into his heart. Only by creating the amazing Iron Man armor can he stay alive! Packed with the debonair and debutantes, Cold War monsters and sultry super-spies, the inaugural Iron Man Masterworks is a cover-to-cover classic that's "must" reading for every fan of the sensational character that took both comics and film by storm.

Led by Stan Lee, Don Heck, Jack Kirby and Steve Ditko--the trio of artists that launched the Marvel Age--bring you the creation of a cultural icon. You'll see the ever-evolving Iron Man armor in development, the first appearance of classic characters from Happy Hogan and Pepper Potts, to the Crimson Dynamo and the Mandarin, and so much more.