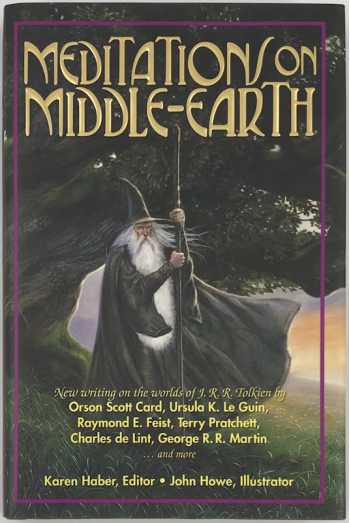 Signed by three contributors each on a different page: editor Karen Haber and authors Terry Pratchett and Harry Turtledove.

NOMINATED FOR THE 2002 HUGO AND LOCUS AWARD

When J.R.R. Tolkien created the extraordinary world of Middle-earth and populated it with fantastic, archetypal denizens, reinventing the heroic quest, the world hardly noticed. Sales of "The Lord of the Rings" languished for the better part of two decades, until the Ballantine editions were published here in America. By late 1950s, however, the books were selling well and beginning to change the face of fantasy. . . . forever.

A generation of students and aspiring writers had their hearts and imaginations captured by the rich tapestry of the Middle-earth mythos, the larger-than-life heroic characters, the extraordinary and exquisite nature of Tolkien's prose, and the unending quest to balance evil with good. These young readers grew up to become the successful writers of modern fantasy. They created their own worlds and universes, in some cases their own languages, and their own epic heroic quests. And all of them owe a debt of gratitude to the works and the author who first set them on the path.

"In Meditations on Middle-earth," sixteen bestselling fantasy authors share details of their personal relationships with Tolkien's mythos, for it inspired them all. Had there been no "Lord of the Rings," there would also have been no "Earthsea" books by Ursula K. Le Guin; no "Song of Ice and Fire" saga from George R. R. Martin; no "Tales of Discworld" from Terry Pratchett; no "Legends of Alvin Maker" from Orson Scott Card. Each of them was influenced by the master mythmaker, and now each reveals the nature of that influence and their personal relationships with the greatest fantasy novels ever written in the English language.

If you've never read the Tolkien books, read these essays and discover the depthy and beauty of his work. If you are a fan of "The Lord of the Rings," the candid comments of these modern mythmakers will give you new insight into the subtlety, power, and majesty of Tolkien's tales and how he told them. "Meditations on Middle-Earth" is a 2002 Hugo Award Nominee for Best Related Work.

Karen Haber is the art book reviewer for "Locus," and profiles artists for both "Realms of Fantasy" and "Galaxyonline." She is co-editor, along with her husband, Robert Silverberg, of the Bantam/Spectra science fiction anthologies, "Universe 1 & 2."

John Howe is universally considered to be the foremost Tolkien illustrator (along with Alan Lee).

"This set of essays on the fantasy classic's influence sets the bar very high...good stuff." --Booklist

"This anthology presents appreciative essays in honor of the master of Middle-earth from such major fantasy and SF authors as Harry Turtledove, Raymond Feist, Terry Pratchett, George R.R. Martin and the late Poul Anderson...Editor Haber offers an adoring but welcome antidote to the more pompous exegeses of the 'author of the century.'" --Publishers Weekly