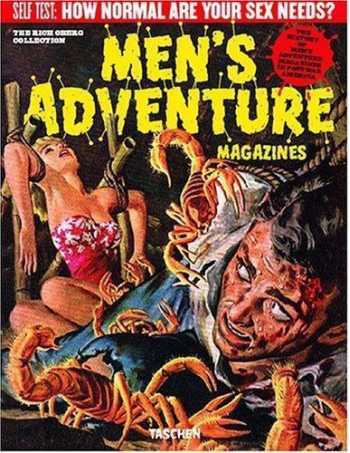 Collector Rich Oberg saw his first men' s adventure magazine on a Piggly Wiggly grocery store magazine rack in 1968 and decided that maybe shopping with mom wasn't so bad after all. He began collecting the magazines and the original art that graced their covers in 1982 and now maintains the largest known collection in the United States.

Max Allan Collins is a novelist and filmmaker fighting nature in Iowa (indoors). His novel Road to Purgatory is the sequel to his famed Road to Perdition, the basis of the motion picture starring Tom Hanks. He is also the author of the Nathan Heller novels, which have won him a Life Achievement Award from the Historical Mystery Appreciation Society.

For over 20 years, George Hagenauer has been Collins s research associate, assisting on over two-dozen historical novels and collaborating with him on the Edgar Award-nominated The History of Mystery. His own freelance writing has been in the true crime field. He lives in Wisconsin.

Steven Heller is the author of The Swastika: A Symbol Beyond Redemption and Merz to Emigre and Beyond: Avant Garde Magazines of the Twentieth Century, among over 80 other titles.