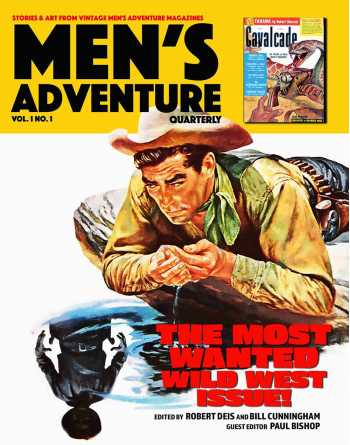 A new 156-page, full-color anthology that reprints stories and illustrations from men's adventure magazines published in the '50s, '60s, and '70s and provides background on the writers, artists, and publishers who created them. Each issue focuses on stories and artwork related to a particular topic.

The first issue, Vol. 1, No.1, focuses on Western stories and artwork, subtitled "The Most Wanted Wild West Issue."

Each shows the cover of the issue the story comes from and the interior illustrations or photos used for it, plus an introduction with background info on the magazine, writer, or artist.

Included are authorized reprints of Western stories by Lou Cameron, the prolific writer who essentially launched the "adult Western" paperback genre with his LONGARM and STRINGER series, and Donald Honig, one of the last surviving writers who was a regular writer for the great MAMs published by Martin Goodman's Magazine company (ACTION FOR MEN, FOR MEN ONLY, MALE, MEN, STAG, etc.).

MAQ #1 also includes the "MAQ Art Gallery," showcasing MAM covers by some of the best artists who worked for the MAM genre.

The cover and interior artwork shown with the stories are by other top artists, such as Mort Künstler and Samson Pollen.

Another recurring feature is the "MAQ GAL-lery," a special section showcasing pinup photos of some of the glamour girls who appeared in MAM photo spreads, along with biographical info about them.