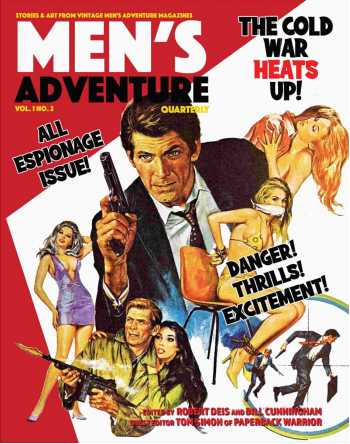 Espionage is the theme of the MEN'S ADVENTURE QUARTERLY, Vol. 1, No. 2.

It features classic James Bond-style spy stories and artwork from men's adventure magazines published in the '60s and '70s. This blog post provides a look at some of what's inside. You can also see a flip-page preview at this link.

MAQ #2 starts with intros by Bill and I, then a special introduction by Tom Simon, co-host (with Christopher Eric Compton) of the popular Paperback Warrior book review site and podcast. In his intro, Tom connects some of the dots between classic pulp mags, vintage paperbacks, and men's adventure magazines.

The fiction stories reprinted in MAQ #2 are some of my favorite MAM spy yarns. I introduce each one with some notes about the writer, artist, or magazine involved. We show the cover of the issue each story appeared in and the illustrations or photos used for them in the magazines.

The first fiction story is "The Kremlin Agent Will Be Wearing a Pink Nightgown." It comes from MALE, October 1961. That issue features a classic battle scene by Mort Kunstler, whose original men's adventure mag artwork is featured in the book Wyatt Doyle and I did with him, MORT KÜNSTLER: THE GODFATHER OF PULP FICTION ILLUSTRATORS.

The illustration for the story was done by Walter Popp (1920-2002), another great mid-20th Century paperback cover and men's adventure magazine illustration artist.

The female model for that illo was Popp's wife Marie Popp. If you look at women in most of Walter's paperback covers and MAM illustrations from the '50s and '60s, you'll recognize her. In addition to being Walter's favorite model, she was a successful illustration artist herself.

The story was written by Martin Fass (1914-1981), whose work appeared regularly in the MAMs published by Martin Goodman's Magazine Management company, such as FOR MEN ONLY, MALE, MEN, and STAG.

Fass is less well known than some of the Mag Management regulars who went on to greater fame by writing novels or screenplays, like Mario Puzo, Bruce Jay Friedman, Walter Wager, Don Honig, and Martin Cruz Smith. But in the '50s and '60s he wrote over 200 MAM stories.

Fass developed his writing skills during World War II, when he was assigned to write for and edit several military newspapers and serve as program director for the Armed Forces Radio Station WVTL. After the war, he became a successful freelancer who wrote short stories for MAMs, scripts for radio, articles for encyclopedias, and the daily Nero Wolfe newspaper comic strip based on Rex Stout's detective character.

The next story in MAQ #2 is "The Deadly Spy Mystery of the Formosa Joy Girls." It's a wild yarn with a wild interior illustration by Basil Gogos.

The GAL-LERY in MAQ #2 goes with our espionage theme by featuring three ladies who appeared in classic spy movies and TV shows: Diana Rigg, Monica Vitti, and Ursula Andress.