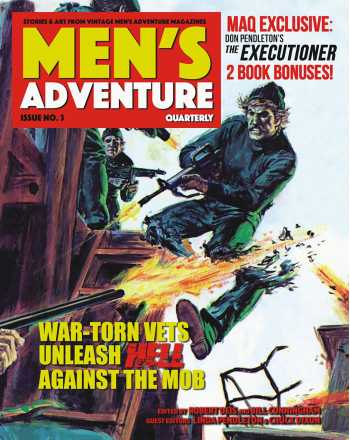 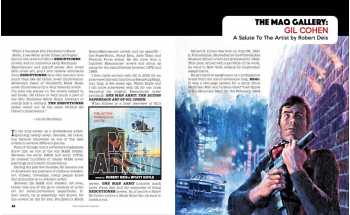 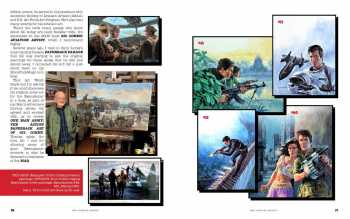 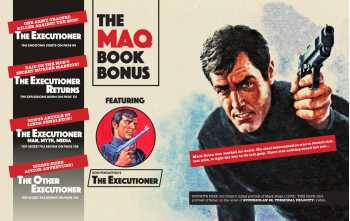 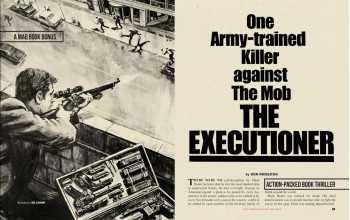 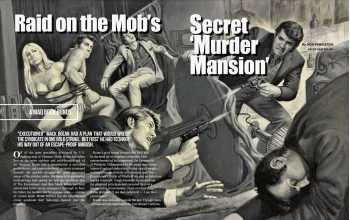 We dubbed MAQ #3 our "Vigilante Justice" issue, since it focuses on stories about tough but moral men who take on and take out mobsters and other bad guys deserving of justice dealt "with extreme prejudice."

It's an over-the-top scene used for one of the stories included in MAQ #3 - "The Amputee Vengeance Squad's Mafia Wipeout."

To help put such tales in perspective, MAQ #3 kicks off with an introduction by the legendary comics writer and novelist Chuck Dixon about the "Vigilante Justice" genre of stories and books.

Chuck is literally the most prolific American comic book and graphic novel writer of all time. He's penned over 40,000 pages worth of stories for hundreds of issues published by DC, Marvel, and other comics companies.

His Batman comics featuring the character Bane (who he co-created with Graham Nolan) and his seminal entries in THE PUNISHER series are special favorites of mine.

The Punisher and Levon Cade are both prime examples of "Vigilante Justice" style characters.

As Chuck notes in his article, many modern "Vigilante Justice" stories and novels are literary descendants of Mack Bolan, "The Executioner." And, MAQ #3 features some special treats for Executioner fans.

If you're one of those fans, you probably know that The Executioner series was created by author Don Pendleton in 1969. It launched a publishing phenomenon that lasted far beyond Don's death in 1995.

There are now more than 460 Mack Bolan novels and another 400+ in related spinoff series: the ABLE TEAM, PHOENIX FORCE, STONY MAN, and SUPER BOLAN series.

With hundreds of millions of copies of Executioner novels and spinoffs in print, Mack Bolan is probably the world's most popular "Vigilante Justice" character.

The first two Executioner novels, WAR AGAINST THE MAFIA and DEATH SQUAD actually led to the creation of the term "action/adventure novels" -- and spawned many copycats.

The action/adventure name was coined by Pendleton himself when his editors at Pinnacle asked him what genre The Executioner series fit into.

WAR AGAINST THE MAFIA and DEATH SQUAD are also the only two Executioner stories that were turned into MAM "Book Bonus" stories -- i.e., condensed versions of the novels accompanied by specially-created artwork.

I first discovered those stories while doing research for the book ONE MAN ARMY: THE ACTION PAPERBACK ART OF GIL COHEN, which I co-edited with Wyatt Doyle for our Men's Adventure Library book series.

Gil Cohen is one of the greatest artists who did cover paintings and interior illustrations for MAMs. He also created many paperback cover paintings before focusing on doing large scale military aviation paintings (showcased in the book GIL COHEN: AVIATION ARTIST.)

During the 1980s, Gil created more than 200 cover paintings for The Executioner series and its spinoffs.

His cover art for those novels are fan favorites and established the familiar visual image of Mack Bolan.

MAQ #3 includes a special section about Gil and his Executioner cover art.

In addition to showing photos of many of his originals

Ironically, before Gil started doing covers for Executioner novels, he was the first artist to depict Mack Bolan in a magazine illustration.

It was used for the Book Bonus version of WAR AGAINST THE MAFIA published in FOR MEN ONLY, October 1969 with the title "One Army-trained Killer against The Mob: THE EXECUTIONER."

A Book Bonus version of the second Bolan novel, DEATH SQUAD, was published in another MAM -- MEN, September 1971, with artwork by Samson Pollen. In that, it's titled as "Raid on the Mob's Secret Murder Mansion.'" (By the Way, Sam Pollen's original MAM art is featured in two books I co-edited, POLLEN'S WOMEN and POLLEN'S ACTION.)

MAQ #3 reprints both of those stories for the first time ever, thanks to the kind permission of Don's wife, Linda Pendleton.

It includes several of her "cheesecake" photo spreads from MAMs, some of which are artfully colorized by Bill Cunningham.

That section also showcases the first paperback cover paintings Bettie ever posed for, created by the great illustration artist, art teacher and author Jack Faragasso, along with reference photos Jack took of her and a profile of Jack.