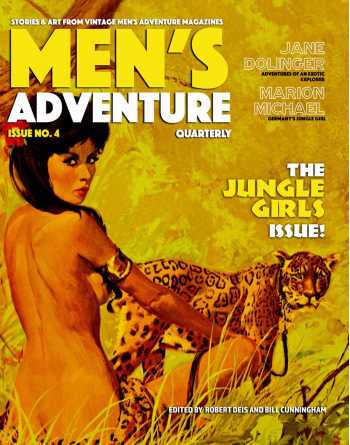 It features vintage stories and artwork about fictional "Jungle Girl" characters and special in-depth sections about two real women who earned Jungle Girl titles: "Jungle Jane" Dolinger, the only woman who was both an adventure-travel writer for men's magazines and a pinup photo model; and actress Marion Michael, who gained fame in the late 1950s and early 1960s as the star of the film LIANE, JUNGLE GODDESS and its sequel.

As you probably know, "Jungle Girl" characters existed long before the men's adventure magazine genre took shape in the early 1950s. An early prototype is the mysterious queenly character who ruled over an African tribe in H. Rider Haggard's 1886 novel SHE. Another is Rima, "the Bird Girl" of South America, in William Henry Hudson's 1904 novel GREEN MANSIONS.

Neither of them quite fits the image most people now think of as "Jungle Girls." That iconic image--beautiful young women who live in jungle areas and wear scanty costumes made from animal skins--came a bit later.

Tarzan creator Edgar Rice Burroughs helped popularize the name for this trope by publishing the novel JUNGLE GIRL: THE LAND OF HIDDEN MEN in 1932. It inspired a 1941 movie serial about Nyoka, the Jungle Girl. That led to the publication of NYOKA THE JUNGLE GIRL comic books published by Fawcett between 1942 and 1953 and revived several times by other comics companies in later decades.

In MAQ #4, we reprint some of our favorite men's adventure mag stories and artwork about various types of Jungle Girls. Four of the stories are examples of the most common types of pulpy jungle girls yarns that appeared in MAMs in the 1950s and 1960s.

Basically, these kinds of MAM stories involve either beautiful, sexy white women who live among jungle tribes, often as their rulers--or beautiful, sexy native girls. In both cases, they generally end up having sex with the "Yank" soldiers, explorers or adventurers who are the male protagonists in the stories. Sometimes, in between the lovemaking, they help those men fight escape from native warriors or fight enemy soldiers. Sometimes they try to enslave or kill them.

Examples we picked for MAQ #4 include: "The She-Wolf of Halmahera" by Leonard Kelcey and the wild story "100 Days With Guatemala's Taboo Maiden Love Tribe" by Donald Honig. Don is one of the last living writers who was a regular contributor to the Atlas/Diamond line of MAMs published by Magazine Management, the company owned by Marvel Comics founder Martin Goodman. He also wrote many novels, then went on to become one of America's premier baseball historians.

One whole section of MAQ #4 is dedicated to a woman who was a true pioneer when it comes to being a liberated woman -- Jane Dolinger. Jane was a prolific, once famous adventure-travel writer who charted her own course in life.

Her books and magazine articles about her sojourns among native people in South America and elsewhere around the globe earned her the nickname "Jungle Jane."

She was the only woman who was a regular contributor of stories to men's magazines. Like many MAM stories, they often stretch the truth. But all of her stories were grounded in things she learned on her actual travels to throughout the world.

She was also the only woman who was, in addition to being a writer, a popular glamour girl photo model with an amazingly voluptuous body and a willingness to show it off to enhance her fame. Thus, she was both an early feminist and an early post-feminist.

I first became interested in Jane back in 2013, when Wyatt Doyle and I published one of her classic MAM stories in the first book in our Men's Adventure Library books series, WEASELS RIPPED MY FLESH!

In MAQ #4, we reprint several stories written by Jane and several articles about her. We also feature an exclusive interview with Dr. Lawrence Abbott, author of the biography, JANE DOLINGER, THE ADVENTUROUS LIFE OF AN AMERICAN TRAVEL WRITER.

The other woman we pay special tribute to is German actress Marion Michael, who was once billed as Germany's answer to Brigitte Bardot.

In MAQ #4, we've reprinted several articles about her from vintage MAMs, plus some of the cool posters and lobby cards used for her films.