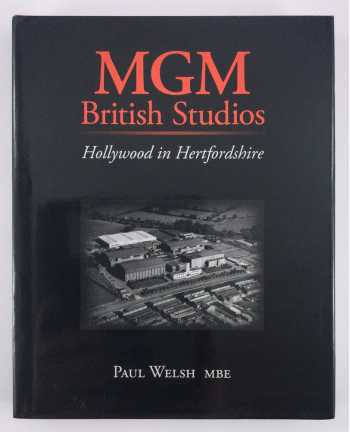 A privately printed, photo history. Out of print.

Before the demolition crews arrived in 1973, MGM British Studios stood empty. A young film fan, I asked for permission to visit and was granted access for three days.

On the backlot stood sets built for 'Man's Fate' and all the street sets, slowly decaying. On its side lay a rusting cable car from 'Where Eagles Dare', and beyond that, rows of staircases leading to...nowhere. Ho silent the backlot was, and how enormous.

I walked past cutting rooms, reels of 35mm film and editing machines. Workshops seemed as if the plasterers and carpenters had just gone off for the weekend, their half empty cups of tea, newspapers and moulds for '2001 - A Space Odyssey' left on the benches.

I ventured into cavernous sound stages, alone with the ghosts of Tracy, Gable and so many other stars who once walked on those well-worn wooden floors.

Dressing rooms awaited forlornly the return of Liz Taylor and Richard Butron. Scattered on the floors of the makeup department were photos of Grace Kelly, Robert Taylor and Ava Gardner. And in the corner lay a chainmail glove, left over from 'Ivanhoe'.

One of the greatest film studios of the 20th century lay desolate and in ruins. But how had it come to this?

If there was ever a ‘Rolls Royce' of British film studios, it was MGM British, which stood on 115 acres off Elstree Way from 1936 until 1970, where it produced world-famous films, attracting many of Hollywood's most legendary stars.

The studio was built in 1936 as Amalgamated Studios but never opened.

The next twenty-five plus years saw a steady stream of stars in MGM films and those of other production companies, creating such well-remembered films as Ivanhoe, Mogambo, The Man Who Never Was, Inn of the Sixth Happiness, Village of the Damned, The VIPs, The Dirty Dozen, 2001: A Space Odyssey, Where Eagles Dare and such TV series as Danger Man, The Prisoner and UFO.

The MGM British studios closed in early 1970; MGM shared premises with EMI at what is now Elstree Studios until 1973 when it withdrew completely from the UK production scene.

Over 300 pages long and containing more than 400 photos and drawings, most never previously published, this book tells the stories of the talented staff who worked in front of or behind the cameras.