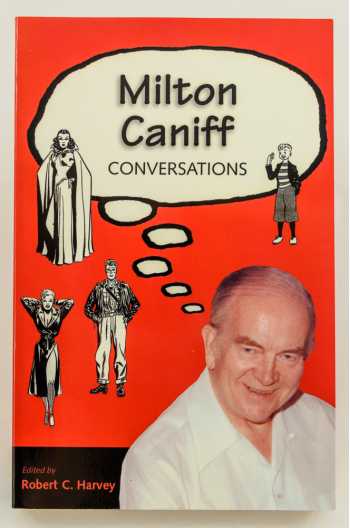 In this collection of more than a dozen interviews, one of the giants of American comic strips talks about his life and his craft. The years spanning 1937 to 1986, when the interviews were conducted, embrace almost all of Caniff's career as he was producing the legendary Terry and the Pirates and his post-World War II masterpiece Steve Canyon.

In long interviews with such comics luminaries as Jules Feiffer and Will Eisner, Caniff (1907-1988) discusses his signature chiaroscuro style, his passion for realism in every detail, and his relationships with such other cartooning greats as Al Capp (Li'l Abner), Noel Sickles (Scorchy Smith), and Alex Raymond (Flash Gordon).

As Caniff speaks earnestly about his art, his techniques, and his intentions, he discloses his inspirations. He based his characters on real persons and his material on contemporary politics and military issues. He gives candid opinions about the effects of the marketplace, business, and sales upon his art. "I would have created Blondie if I'd known that I could have sold it, you can be damn sure." He notes that the cause for terminating his association with Terry and the Pirates and his creation of Steve Canyon was neither lack of interest nor censorship but the opportunity to exert full creative control over his work.

Few of the interviews in this volume are likely to have been seen or read widely, for most have been gleaned from publications not in general circulation. Interviews from U.S. military publications attest to Caniff's status as a spokesman for the military, particularly for the Air Force. These interviews reveal how Caniff contributed to uplifting servicemen's wartime morale with both Terry and the Pirates and Male Call, a somewhat risque strip he drew for military newspapers, and how Caniff's loyalty to the military cost his strip vital circulation as Vietnam War protest mounted.

Robert C. Harvey, a cartoonist, columnist, and critic of cartoon art, and the author of The Art of the Comic Book: An Aesthetic History, The Art of the Funnies: An Aesthetic History, and (with Gus Arriola) Accidental Ambassador Gordo: The Comic Strip Art of Gus Arriola (all published by the University Press of Mississippi), was appointed by Caniff as his official biographer.