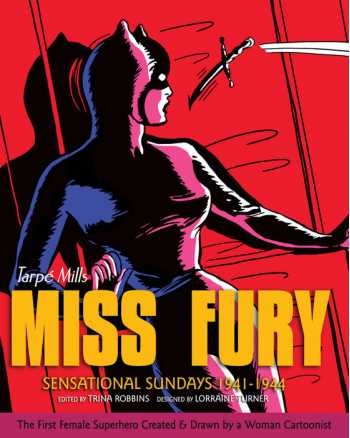 Reprinting every Miss Fury Sunday page from the beginning in April 1941 through April 1944 (where our companion volume picks up), we learn the origins of Miss Fury and her skin-tight panther costume–complete with its sharp claws on her hands and her feet! By day, she was socialite Marla Drake–by night, the costumed adventuress Miss Fury. These early exploits introduce all of the memorable characters who remained in the strip for the rest of the decade: the one-armed General Bruno, the Baroness Erica Von Kampf (with a swastika branded on her forehead), Albino Jo, and the all-American Gary Hale and Detective Carey, who each vies for Marla's affections. The stories range from downright kinky to all-out action against Nazis spies, cutthroats, and thieves.