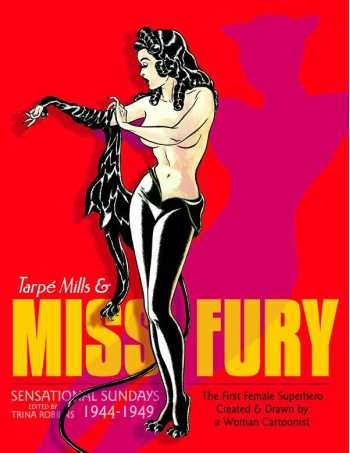 Catfights and crossdressers, mad scientists and Gestapo agents with swastika-branding irons–it's one lurid and exciting adventure after another in this lavish, full-color collection of the first female superhero created and drawn by a woman. Miss Fury was a sexy adventurer clad in a skin-tight panther costume-complete with sharp claws on her hands and her feet!

By day, she was socialite Marla Drake. By night... Miss Fury.

The strip was populated by a cast of memorable characters who were connected to each other by far less than six degrees of separation and whose paths were interwoven like a complicated tapestry.

- The one-armed general Bruno, a Rommel-esque figure who is a German patriot, but plots to overthrow the Nazi party.
- Marla's recurring nemesis, the Baroness Erica Von Kampf, her platinum blonde bangs cut into a V-shape to cover the swastika that was branded on her forehead.
- Gary Hale, the all-American man who doesn't necessary marry the right woman.
- Albino Jo, a Harvard-educated, loincloth-wearing albino Indian in the Brazilian jungle who resurfaces a year later as a pipe-smoking criminologist dressed in a well-tailored suit.
- Whiffy, a French transvestite smuggler of stolen European art!
- Miss Fury's friend Era, who falls for one of two seemingly young and handsome men who actually are 200 years old, and have been drinking an elixir to stay young!

Eisner- and Harvey-nominated writer and historian Trina Robbins has chosen the best Miss Fury stories for this oversized collection, which also features a biographical essay about Tarpé Mills that places her within the history of women cartoonists, and includes pages from an unpublished and unfinished Miss Fury graphic novel by Mills from 1979.