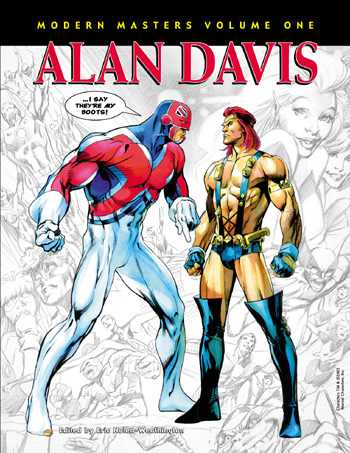 The first in TwoMorrows' series of artist monographs.

In Modern Masters Volume One, we explore the life and career of Alan Davis, with his longest, most in-depth interview to date. In 1982, Davis burst onto the British comics scene, earning numerous awards for his amazing artwork. American success soon followed with his work on Batman & the Outsiders and Detective Comics, and continues on such recent titles as X-Men and Justice League: the Nail, as well as the Spider-Man movie adaptation in collaboration with Stan Lee. Today Davis is recognized as one of the premiere comic book artists in the field, not only for his stunning renditions, but for his exquisite storytelling abilities.

This book, profusely illustrated with a deluxe sketchbook and gallery of rare and previously unpublished artwork, includes a tutorial by Davis on the artists that influenced him, as well as his views on graphic storytelling. Also included are interviews with long-time collaborators Paul Neary (who provides the Foreword) and Mark Farmer (who contributes the Afterword). It's the ultimate look at the work of a true Modern Master: Alan Davis!