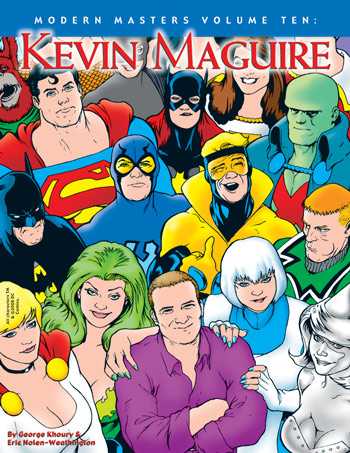 In 1987, a year after Watchmen and Dark Knight Returns turned comics grim and gritty, artist Kevin Maguire proved that comics could still be fun, with the release of the "all-new" Justice League. His style was the perfect match for the humorous dialogue and character-driven stories, and the unlikely series quickly developed a large following. But the glue that held the series together was Maguire"s ability to convey emotion on the page. He has an uncanny knack for capturing just the right facial expression and body language in his figures. The Justice League, Captain America, the X-Men, the Defenders... they are all actors on Maguire"s stage, and he directs them with the ability of a true Modern Master. This new volume in the Modern Masters series, by George Khoury and Eric Nolen-Weathington, features a career-spanning Kevin Maguire interview and tons of artwork, including a large gallery section featuring many rare and unpublished sketches and finished pieces. This 128-page volume presents the ultimate look at the work of a true Modern Master: Kevin Maguire!