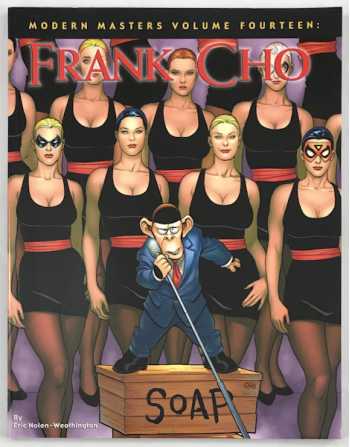 A book-length interview with over 150 black & white illustrations.

Monkeys! Dinosaurs! Beautiful women! These are the things Frank Cho loves to draw... especially beautiful women! Luckily for his fans, he excels at it. In 1997, the writer and artist introduced Liberty Meadows to the world, which quickly gathered a dedicated following. The winner of many prestigious awards - including The National Cartoonist Society Award and the Charles Schulz Award - Frank Cho ranks as one of Marvel Comics' top current artists, and his work on Liberty Meadows, Shanna the She-Devil, Spider-Man, and The Mighty Avengers, among others, is simply irresistible. Now, learn about the man behind the monkey in Modern Masters Vol. 14: Frank Cho, as Eric Nolen-Weathington takes an extensive look into Cho's career and creative process. The 120-page book features a career-spanning interview with tons of art, including many rare and unpublished pieces, a large gallery, and an 8-page color section on this true Modern Master: Frank Cho!