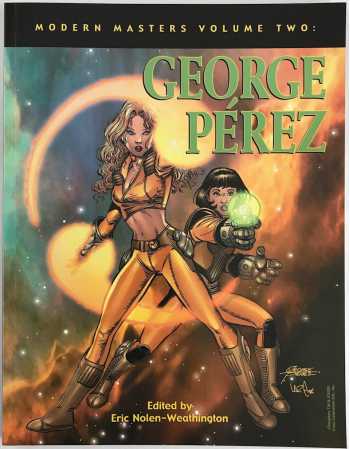 Out of print. A pristine copy.

For more than twenty-five years George Pérez has been a fan favorite in the comic book field. From his artwork for The Avengers and Teen Titans to the Crisis on Infinite Earths series which forever changed DC Comics, this versatile and influential artist is known for delivering top-notch art that fans can't get enough of! Now, this second volume in the new Modern Masters series delves into the artist's life, as Pérez discusses his Puerto Rican upbringing, how he broke into the comics field, and the attention to detail that has made him one of comics' top tier talents.

Modern Masters Volume 2: George Pérez contains page after page of rare and unseen artwork, illustrating a comprehensive interview with Pérez on his stellar career! Released in conjunction with Pérez' work in the upcoming JLA/Avengers series—one of the most highly anticipated events in comic book history—this book is the first such retrospective of the highly acclaimed artist, and the ultimate look at the work of a true Modern Master: George Pérez!