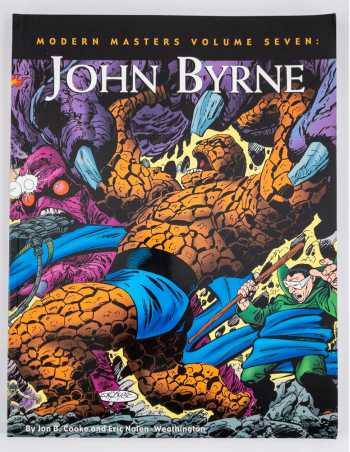 From the death of Phoenix to the rebirth of Superman, John Byrne is one of the most influential comic book artists working in the business. On the X-Men, he penciled the greatest stories in the history of the title and helped propel the X-Men to their current household-name status. His work as writer and artist of Fantastic Four returned the group to prominence within the Marvel Universe. And his reboot of the Superman mythology brought national attention to the comic book industry.

Modern Masters Volume 7: John Byrne features an extensive, career-spanning interview lavishly illustrated with rare and unpublished art, as well as a large sketchbook section. Experience this look at his incredible body of work on such titles as Captain America, Alpha Flight, She-Hulk, Superman/Batman: Generations, and his creator-owned Next Men, and it's easy to see that John Byrne deserves the title Modern Master.