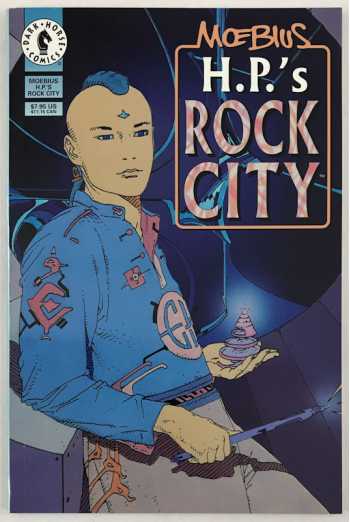 Visit a city in which life is lived before the unblinking stare of surveillance cameras, but where dreams cannot yet be fettered. Take a stroll through streets where racists rule the night and the very air crackles with fear and paranoia. You've entered the mind of Moebius, France's master graphic-novel storyteller.

H.P.'s Rock City is the newest collection of Moebius art and stories, including solo works and collaborations with other writers. The tales touch on such varied themes as hunting, feminism, rock-and-roll culture, nuclear war, and even Christmas! Moebius's collaborators include Dan O'Bannon (screenwriter of Alien) who wrote the sci-fi noir tale titled "The Long Tomorrow," and Philippe Druillet, who wrote the metaphysical science-fiction story "Approaching Centauri." This volume also includes story notes by Moebius, a must for any fan!