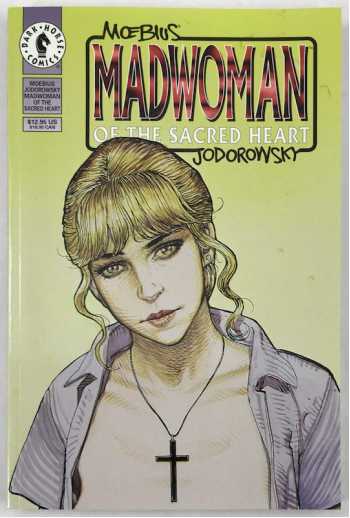 The first English language printing of the first two volumes of Le Cur couronné [Madwoman of the Sacred Heart]. The third and final volume would not come out until 1998. The translation is by Jean-Marc and Randy Lofficier. (The Humanoids translation is by Natacha Ruck and Ken Grobe.) For art fans, these albums are reproduced in black & white for the first and only time.

In a world of fifty-second soundbites, multinational corporations, and drug cartels, how would we deal with the coming of a new Messiah? University professor Mangel, a restless man haunted by his inner demons, becomes involved in a plot by a group of religious fanatics to bring about the birth of a new Savior; and he has been chosen to be the reluctant father. Are they a sect of dangerous madmen, or is God really using them as his messengers?