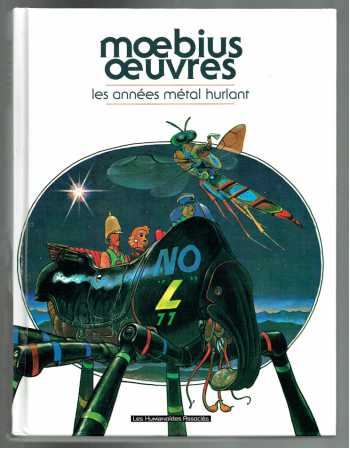 This out of print hardcover omnibus was limited to only 3000 copies and reprints every Moebius story ever published in Metal Hurlant, in chronological order and as it originally appeared in the magazine, in b&w or, if in color, in the original color.

Every Arzach, every Garage Hermetique, and much much more. Including stories that appeared in Metal Hurlant, but not Heavy Metal or any other U.S. publication. A fantastic collection.

During the early 1970s, Jean Giraud aka Gir, invented a new persona, that of Moebius, and takes a major part in the revolution that affects adult comics, influenced by the American underground and the wave of the "counter culture."

Co-founder of the magazine Metal Hurlant and Humanoides, Moebius profoundly changed the aesthetics of science fiction and the style of comics. With Arzach, Major Fatal and dozens of stories (The Deviation, White Nightmare), the work of Moebius has global impact.