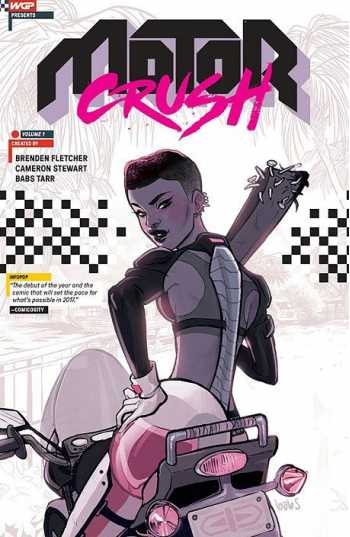 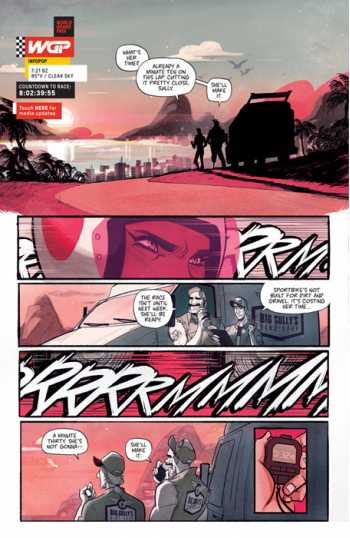 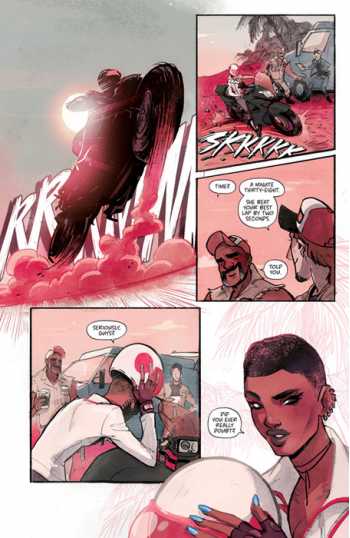 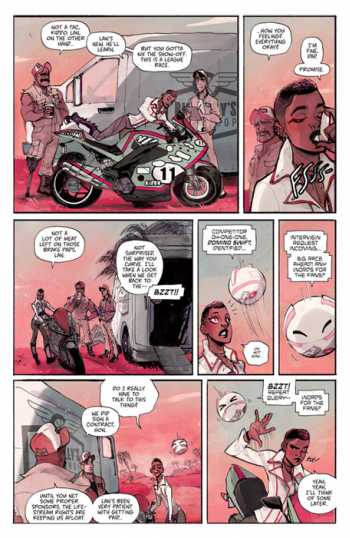 A pristine first signed by the artist Babs Tarr.

The team behind the critically-acclaimed revamp of Batgirl returns with an exciting sci-fi action-adventure series! By day, Domino Swift competes for fame & fortune in a worldwide motorcycle racing league. By night, she cracks heads of rival gangs in brutal bike wars to gain possession of a rare, valuable contraband: an engine-boosting "machine narcotic" known as Crush.

PUBLISHERS WEEKLY (STARRED) -- The creative team behind a successful Batgirl run reunite for the thrilling story of foxy motorcycle racing phenomenon Domino Swift. She competes in the prestigious World Grand Prix by day, and at night she battles rival bikers in an ongoing conflict over Crush, a valuable and rare engine-boosting stimulant. This series, a spiritual successor to Speed Racer's rubber-burning mayhem, is packed with fun characters, visceral high-speed action, romance, and a general sense of unbridled action. The whole package is worthy of note, and Stewart and Tarr's art really grabs the reader by the eyeballs. It's heavily animation-influenced and practically leaps off the page. A number of comics have attempted to evoke the edge-of-your-seat allure of racing combined with a strong narrative; most have come up short, but this must-read gem makes it work.

LIBRARY JOURNAL (STARRED) -- American adrenalin meets Battle Angel Alita in this gleaming drama about motorbike racers. The sassy and bold Domino Swift competes in legal and extralegal competitions that pit overhyped celebrity riders against one another, on bikes souped up with a contraband accelerant dubbed "Crush." But Dom confronts a mystery: her own body requires the dangerous Crush drug to live normally. Why is her adopted father hiding her heritage, and who are her mysterious pursuers? Brilliantly colored visuals create Dom's world as glam-hipster with an anime vibe. (An LJ 2017 Best Graphic Novel)