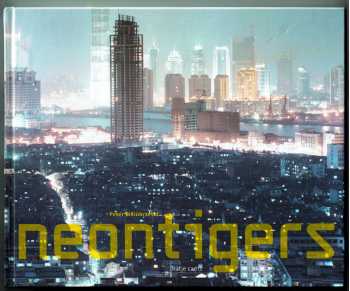 "In Neon Tigers, I merge the seven Asian cities of Bangkok, Kuala Lumpur, Hong Kong, Shanghai, Jakarta, Singapore, and Shenzhen into a virtual megatropolis. My photos present an image of a world that no longer seems real but appears instead as a series of dream-images of an eccentric film architect or computer-game producer."

References to reality evoke a sense of conflict in the viewer, as appreciation for the beauty of the absurd competes with recognition of an irreversible process of change in urban living space. Two different growth models are exposed: unscrupulous, uncontrolled expansion, as in Bangkok, and controlled, yet equally unscrupulous growth in a city like Shanghai. The pictures burst with conflicting signs and symbols, mostly indecipherable to the western viewer, a semiotic overkill held in check only by the edge of the picture frame.

"The urban centers in Mr. Bialobrzeski's pictures flow together into a single fictional city more real than reality, for cities are no longer singular places but nodes in the information network, ''not a place but a process,'' as Manuel Castells wrote in 1996 in ''The Rise of Network Society.'' The megacities of Southeast Asia exist in these images as a fantasy that makes no solid distinctions between Shanghai, Hong Kong and Kuala Lumpur. Peter Bialobrzeski's photographs put a radiant, glamorous face on globalization and the invisible and powerful network that shapes our surroundings -- and virtually runs our lives." Vicki Goldberg, New York Times