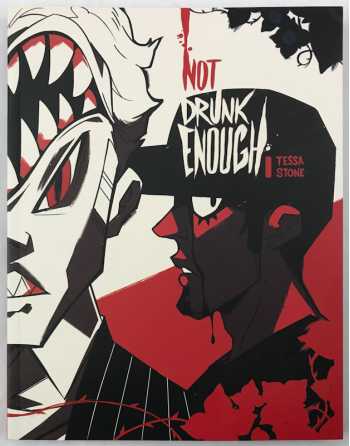 Logan is a repairman in the wrong place at the wrong time--which is a creepy corporate lab in the middle of the goddamn night. After fighting off a freaky creature, he joins forces with three other poor souls trapped inside the building. Who are they? What are they doing here? What the hell is going on? And will any of them get out alive? The first in a brand new series from the mind of Tessa Stone (Hanna Is Not a Boy's Name, Buzz!)!

PUBLISHERS WEEKLY--Hapless overnight repairman Logan finds himself fighting his way through a lab crowded with monstrosities: man-made crimes against nature lurking down hallways and around corners. What's turned this industrial laboratory into an urban battlefield? Logan leads the survivors (not many of them) in a quest for the answers and the exit. Collected from Stone's (Buzz!, Hanna is Not a Boy's Name) webcomic, this blood-spattered thrill ride is a cross between The Walking Dead and Die Hard with a dash of The Evil Dead's black humor. Rapid-fire action and sharp-as-an-axe dialogue drive a page-flipping narrative. Manga-style angular humans and monsters explode on the page with deep blood-reds, shadowy darks, and thick black panel borders that wall Logan in like an endless labyrinth. Even Stone's expressive lettering brings a violent, ragged language to screams, growls, and bone crunches. The raucous fusion of smarts and shivers elevates it above the average crowd of gory monster comics-a bloody good frightfest.