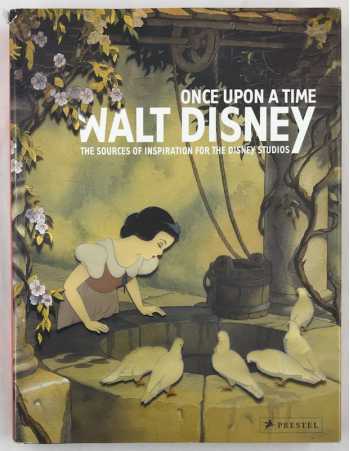 Out of print in all versions, this is the scarcer hardcover edition.

While the works of Walt Disney rank among the icons of American mass culture, it is easy to forget that Disney's characters and stories were inspired by original works of art. Now the sources that motivated Disney's imagination-and the artists that his studio in turn influenced-are brought to light. From the launching of the Walt Disney Company until the founder's death in 1967, this book includes more than 300 original works selected from the Disney archives and from private collections, together with paintings, sculptures, drawings, photographs, and film stills.

Here Disney fans will discover the fairy tales behind Sleeping Beauty and Snow White; they'll learn that Pinocchio's village was modeled on the medieval city of Rothenburg in Bavaria; that Bambi's forest took its inspiration from fifteenth-century Chinese painting; that Dumbo's bird's-eye views drew on the work of Grant Wood and Thomas Hart Benton. Finally, the book looks at the myriad ways in which Disney's products became source materials for modern and contemporary artists, including Prokofiev and Leopold Stokowski as well as Christian Boltanski, Bertrand Lavier, Peter Saul, and Gary Baseman. A wonderful sourcebook for Disney enthusiasts, this colorful volume offers a unique perspective on the often-overlooked links between highbrow and popular culture.

Very Good+ in Very Good+ dustjacket (bump to the head of the spine with a 3/16-inch tear, pages lightly bent at the upper corner, otherwise very soun