Sign in | Register
HomeNew ArrivalsOnly at Comic-Con: Hollywood, Fans, and the Limits of Exclusivity
Save 33% 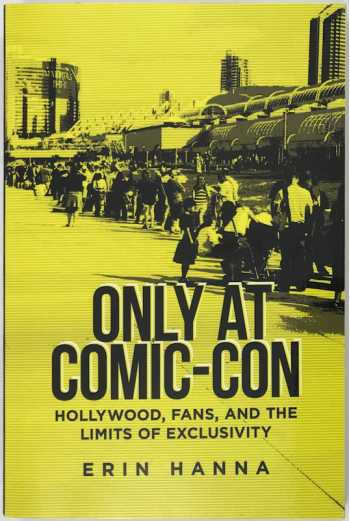 An enjoyable academic treatise on the convention we love to hate.

When the San Diego Comic-Con was founded in 1970, it provided an exclusive space where fans, dealers, collectors, and industry professionals could come together to celebrate their love of comics and popular culture. In the decades since, Comic-Con has grown in size and scope, attracting hundreds of thousands of fans each summer and increased attention from the media industries, especially Hollywood, which uses the convention's exclusivity to spread promotional hype far and wide. What made the San Diego Comic-Con a Hollywood destination? How does the industry's presence at Comic-Con shape our ideas about what it means to be a fan? And what can this single event tell us about the relationship between media industries and their fans, past and present? Only at Comic-Con answers these questions and more as it examines the connection between exclusivity and the proliferation of media industry promotion at the longest-running comic convention in North America.

ERIN HANNA is an assistant professor of cinema studies at the University of Oregon in Eugene.

"This is an important book for fan studies and beyond. Not only a brilliant exploration of Comic-Con's history and place in contemporary culture, it also takes seriously aspects of this experience that have been under-researched. What are the meanings and values of waiting in line? How does Hall H operate? And how have licensees become so central to the event? Assessing fans' liminal positioning, Erin Hanna acutely theorises 'exclusivity' and its (re)configurations. Start the queue here - this is a must-read for anyone interested in aspirational and affective labor, as well as Hollywood's attempts to build cultural capital for its blockbusters."--Matt Hills "author of Fan Cultures and Doctor Who: The Unfolding Event"

"This exciting, well-researched book situates Comic-Con within the confluence of fandom, industry, and convergence. Erin Hanna expertly reveals how industry efforts to generate publicity for major media brands hinge on the production of exclusivity for a select number of fans."--Derek Johnson "author of Media Franchising: Creative License and Collaboration in the Culture Industries"