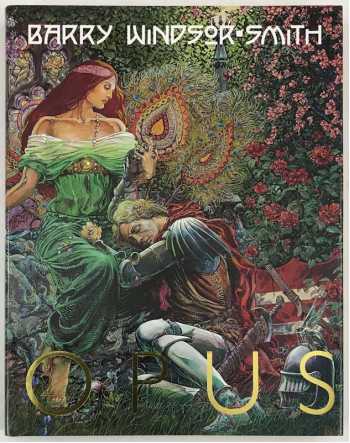 An incredible collection of Barry Windsor-Smith artwork. Classic pieces and never-before-seen works, as well as sketches and in-progress drawings and paintings from all periods.

"With his previous book, BWS: OPUS Vol. 1 (when released, Fantagraphics' all-time quickest selling book), Barry Windsor-Smith joined the ranks of the experiencers and researchers at the new frontiers of consciousness and the revolutionary crossroads of reality. After astonishing encounters with precognition and time loops the artist found himself on a transcendental journey into another dimension of time and space. Now, in the second volume of the OPUS series, Windsor-Smith continues his autobiography called "Time Rise." Following his bizarre interdimensional journey, the young superstar of Marvel Comics' Conan the Barbarian fame discovers that he has acquired advanced psychic abilities! This is the true story of the artist's struggles to deal with the transcendental, yet maddening, effects of meta-consciousness. In addition to Windsor-Smith's groundbreaking text, OPUS is, of course, also a deluxe art collection, featuring the renowned artist's never-before-published paintings and drawings, as well as gorgeous, evocative artworks culled from over thirty years of comics art, comic strips, illustration, and sketchbooks."