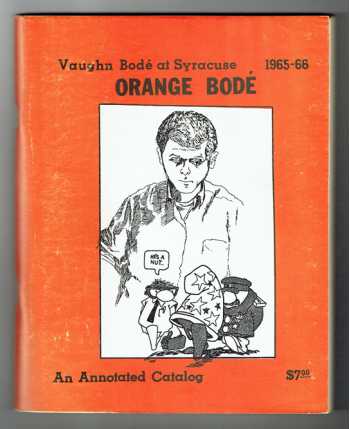 From the Syracuse University Archives:

Bodé began attending Syracuse University in the fall of 1964 as an illustration student on a scholarship through the G.I. Bill and graduated with a bachelors degree in fine arts in 1970. While attending SU, Bodé worked as a commercial artist and illustrator and also published his cartoons in many Syracuse University publications.

Bodé began to gain fame while a student at Syracuse University due in large part to the cartoons published by the Daily Orange. The student newspaper first published The Man, one of Bodés most popular characters, in 1965. Students and professors alike fell in love with The Man, a comic strip about a caveman who made philosophical observations about the world around him. The Daily Orange is also responsible for first publishing Cheech Wizard, perhaps the cartoon for which Bodé is most famous. Bodé developed Cheech Wizard in 1956, yet it was not until April of 1966 that the cartoon first saw publication. The cartoon debuted with a series of strips titled The Race to the Moon. The star of the comic strip, Cheech Wizard himself, was a little man wearing a large yellow wizards hat that covered most of his body, from his head to his waist. All viewers ever saw of Cheech Wizard were his red legs. During Bodés time at SU he also published other comic strips and illustrations in the Daily Orange, Syracuse 10 (the Universitys literary magazine), the Syracuse New Times, and underground publications Vintage and the Sword of Damocles.

Bodé signed his earliest cartoons as "Von," a shortened version of his first name. In 1966 Richard Wilson, director of the Syracuse University News Bureau, for whom Bodé worked on occasion, brought the artists illustrations to the attention of American cartoonist Milton Caniff. Caniff recommended that Bodé sign his actual name to his artwork in order to more easily receive recognition for his work, a suggestion Bodé accepted. From then on his full name accompanied any published cartoon.

Near Fine (some light rubbing to the covers otherwise fine)