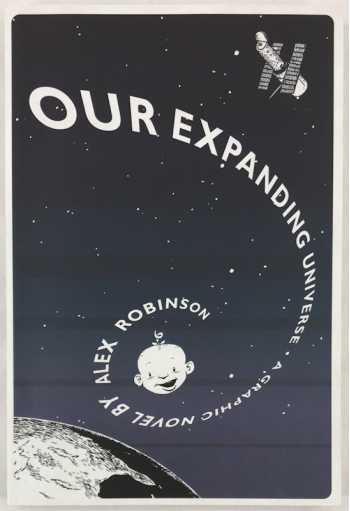 The award-winning author of Tricked and Too Cool to Be Forgotten returns with a spiritual sequel to his Eisner-winning debut, Box Office Poison. It's been 15 years since the young cast of that beloved drama has graced the stage. Now, Our Expanding Universe introduces another Alex Robinson ensemble to explore how time can transform a group of friends, a small constellation of city-dwellers about to take a frightening step into the unknown: parenthood.

Amid dinner parties, game nights, and hospital stays, a once-tight circle of friends wrestle with the shifting shapes of their lives. Under the pressures of marriage and the passage of time, will they cling to the past, leap into the future, or self-destruct? Hey, not every implosion leads to a Big Bang...

Alex Robinson has written and illustrated several graphic novels, including Too Cool to Be Forgotten, Box Office Poison, Tricked, and Our Expanding Universe. He and his work have won several industry awards, including the prestigious Eisner Award and prize for best debut in Angouleme, France. Space considerations prevent us from listing the awards Robinson has lost, unfortunately. He lives in New York City with his wife and their pets, and hopes to have another book out soon.

In Our Expanding Universe, Robinson considers the big choice -- to have kids or not... It's a delight to watch him pile speech bubbles atop each other, assemble mundane elements into complicated full-page tableaux and mix realism with fantasy. --NPR

Robinson is a genius at characterization, and masterly in weaving the friendships and relationships together; the players are so believable and real that readers will continue thinking about them long after the story concludes. --Publishers Weekly

A definitive example of contemporary independent comics' ability to strike a personal chord with readers... genuine and brilliant, a triumph of dramatic storytelling in illustrated format. --Under the Radar