Sign in | Register
HomeAnimation & FilmOut of the Inkwell: Max Fleischer and the Animation Revolution
Save 17% 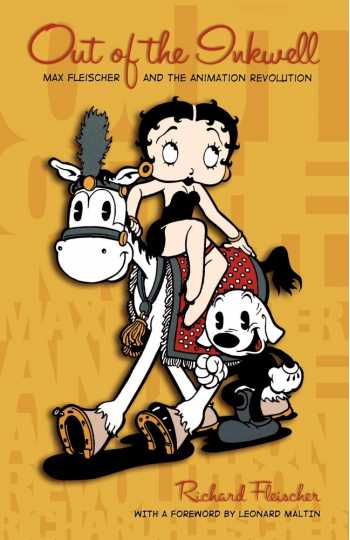 The story of animator Max Fleischer written by his son, director Richard Fleischer. Foreword by Leonard Maltin. 200 pages of text plus 32 pages of black and white photographs.

Max Fleischer (1883--1972) was for years considered Walt Disney's only real rival in the world of cartoon animation. The man behind the creation of such legendary characters as Betty Boop and the animation of Popeye the Sailor and Superman, Fleischer asserted himself as a major player in the development of Hollywood entertainment. Out of the Inkwell: Max Fleischer and the Animation Revolution is a vivid portrait of the life and world of a man who shaped the look of cartoon animation. While deeply engaged with his characters, Fleischer also sought ways to improve his art through technical innovation. Among the many patented inventions Fleischer created was his Rotoscope, a device that helped track live action on-screen and revolutionized the way animated characters appeared and moved. In the 1920s, Fleischer and his brother Dave teamed up to create a series of "Out of the Inkwell" films, which led to a deal with Paramount. Films featuring their character Ko-Ko the Clown introduced new special effects such as startling combinations of live action and animation. In one piece, Ko-Ko emerges from an inkblot and appears on-screen with footage of Fleischer himself. As the sound revolution hit film, the studio produced shorts featuring the characters interacting with songs. The Fleischers involved jazz artists such as Cab Calloway and Louis Armstrong, and the sound cartoons were a howling success. In the next decade, Fleischer Studios produced the features Gulliver's Travels and Mr. Bug Goes to Town and soon went to work on an animated Superman series, which won widespread critical and popular acclaim. In spite of its great popularity and success, however, the studio was abruptly closed. The animated cartoon industry was shocked, and the event went unexplained for many years. Now, Max's son Richard has at last solved the mystery of the shuttering of Fleischer Studios. Max Fleischer's story is one of a creative genius struggling to fit in with the changing culture of golden age cinema. Out of the Inkwell captures the twists and turns, the triumphs and disappointments, and most of all the breathless energy of a life vibrantly lived in the world of animation magic.

"A vivid portrait of the life and world of a man who shaped television animation and became a major player in the development of Hollywood entertainment." -- Animation Magazine

"Max Fleischer is animation's unsung hero. If Walt Disney is the most celebrated and chronicled producer in the history of the medium, Fleischer is his polar opposite. Fleischer has long been a hero to anyone who loves animated cartoons. Now, thanks to his son, we can get to know the very human figure behind all those wonderful films." --Leonard Maltin, from the foreword

"Richard Fleischer has brought a loving tribute to his dad, and a reminder, in times where computer animation seems so effortless, of just how much hard work it took for the pioneers in the field to make the drawings dance." -- Times of Acadiana