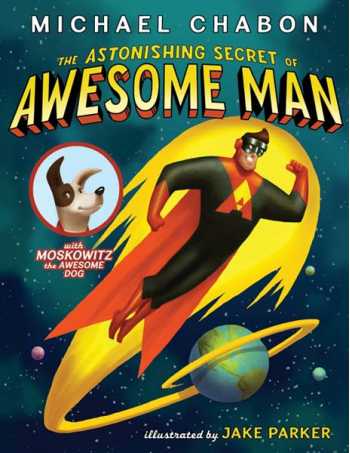 This New York Times Best Selling Children’s Picture Book, written by Pulitzer Prize-winning author Michael Chabon & illustrated by Jake Parker, is already in a second printing. We have first editions signed by both Chabon and Parker.  Don't miss out on your chance to own a rare first edition copy signed by both creators.

Awesome Man can shoot positronic rays out of his eyeballs, fly as straight asan arrow, and hug mutant Jell-O! Even villains like Professor Von Evil and the Flaming Eyeball are no match for this caped crusader.

MICHAEL CHABON is the bestselling and Pulitzer Prize–winning author ofThe Mysteries of Pittsburgh, Wonder Boys, The Amazing Adventures of Kavalier & Clay, Summerland (a novel for children), The Final Solution, The Yiddish Policemen’s Union, and Gentlemen of the Road; as well as the short story collections A Model World and Werewolves in Their Youth; and the essay collections Maps and Legends and Manhood for Amateurs. He lives in Berkeley, California, with his wife, the novelist Ayelet Waldman, and their children.

JAKE PARKER is an illustrator and an artist for animated films. He also draws comics of space mice, monsters, and funny robots. He wrote and illustrated the comic book Missile Mouse. Jake lives in Provo, Utah, with his family.

“The depiction of a showdown between Awesome Man and his nemesis—the Flaming Eyeball—is priceless. Readers may notice that there’s a moral peeking out from Awesome Man’s cape, but they’ll still grab this story in their ‘ginormous Awesome Power Grip’ and not let go.” —School Library Journal (starred review)