Sign in | Register
HomeIllustrationGolden Age IllustratorsPeter Clapham Sheppard: His Life and Work
Save 36% 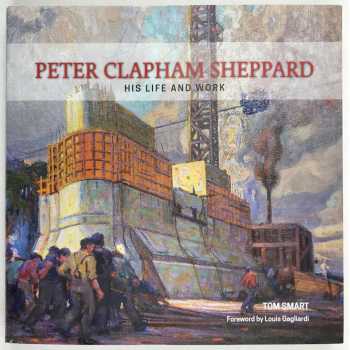 "The book comes alive through images of urban scenes in Toronto, Montreal, and New York. The depictions of snowy 1920s Montreal in particular, with their confident daubs of white paint, seem remarkably modern, as do excellent close-up sketches of water rushing along rocky streams in northern Ontario... Overall, Sheppard is presented as a talented artist whose interests aligned more with John Sloan and the American Ashcan School than his immediate contemporaries."

"Peter Clapham Sheppard was a retiring, elusive artist whose skill and vision, untouched by the noisy nationalism of some of his peers, can now finally be properly celebrated in the remarkable artistic rediscovery that is unveiled in the pages of this book."

This book is a celebration of the rediscovery of the masterworks of Toronto-born Peter Clapham Sheppard (1879-1965), an artist who played a leading role in the founding of Canada's national school of art. A contemporary and colleague of the Group of Seven, he was one of the finest artists of his generation and his work is among the best in Canadian art.

The book is full of beautiful color reproduction of Sheppard's paintings, and his work shows a wide range of sources and influences. In the early years of the 20th century he was a Realist who captured the life and times of the city and people of Toronto. Later, he was inspired by the French Impressionists to capture with paint the effects of light and weather, particularly in winter, in urban settings, especially New York City.

Termed a "radical" in his early career, rather than being inspired by his friends and contemporaries in the Group of Seven, Sheppard looked to New York painters of the urban and industrial scenes for inspiration. He was a forceful painter of urban development which he interpreted as a metaphor of national growth and resilience during World War I.

He was skilled at drawing and painting the city, capturing the dynamism of urban life, but he also traveled into the woods and wilderness of Ontario, much like the Group of Seven, to paint scenes of woods and waterfalls.

Although he was widely exhibited in national and important international exhibitions of Canadian art in his early career, over the course of the last century Sheppard has fallen into the shadow cast by the Group of Seven. From occupying a place among a generation of artists who established a national school, he died in relative obscurity.

This book casts light on a unique talent, an artist of his times, whose art matched the quality of the Group, but found inspiration beyond the sources that inspired his more famous contemporaries. This book is the culmination of a 30-year effort to bring Sheppard's name and art to its rightful place in this country's art history.