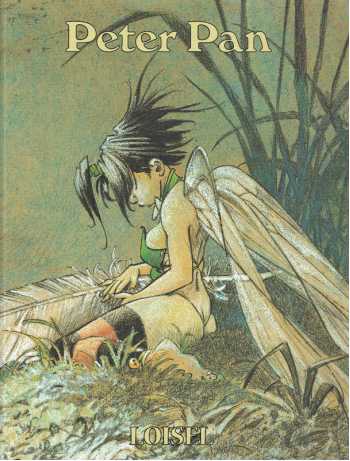 Loisel's classic. The entire six album series in one volume translated into English for the first time.

Before he became Peter Pan, before his arrival to Neverland, he was a boy fighting for survival. Born into the suburbs of harsh, Dickensian London, to an alcoholic mother who leaves him in an almost-orphan state, Peter's only retreat from reality is the fantastical stories given to him by a friendly neighbour--allowing him to escape temporarily from the darkness of the adult world.

Told in language as strong as his mother's brandy, Peter's story is no less intoxicating. While nearly devoid of comfort and compassion, Peter's world becomes rich in magic. Lost fairies, pirates and sirens form a cast both shocking but strangely familiar--this is J.M Barrie's Peter Pan story for an adult audience.

For the first time this six-volume series has been translated into English and collected in one omnibus edition. Through his emotive and engaging artwork, Loisel offers a unique take on a well-known tale that goes into a grim and dark world; the type of childhood where not growing up is not an option.

In his six volumes (London, Opikanoba, Tempest, Red Hands, Hook, Destiny), Loisel goes on to introduce all the principal characters of Neverland  plus several new cast members  and to join the dots between his book and Barrie's tale. We learn how Peter has the permanent ability to fly, the significance of his adoption of the name Pan, why the crocodile ticks and what his purpose is, just why Hook is so obsessed with Peter, how the Lost Boys came to be, and why Tiger Lily loves Peter. Most importantly we learn the potency of the island's power to make its inhabitants forget their adventures and motivations, forcing them to repeat their mistakes and discoveries in a perpetual loop.