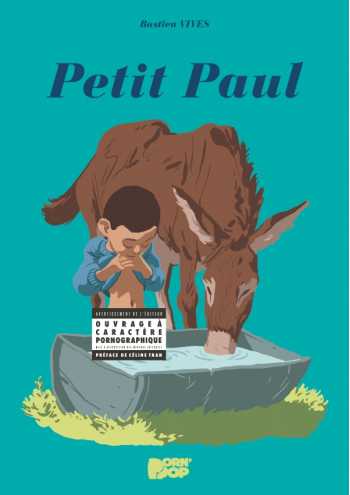 This is one of Bastien Vives' occasional pornographic sex comedies. His third after Les Melons de la Colère and La Décharge Mentale. Those two were released by a small publisher of underground comics. However this is the first from a major publisher and lead to a major kerfluffle....

Petit Paul, the album that launches Glénat's new pornographic collection, PORN'POP, is at the heart of a lively controversy and subject of a petition that demands its withdrawal from the market, was removed from the shelves of Cultura and Gibert.

"It was finally time for comics to talk about today's sexuality. Supervised by Céline Tran, former adult actress known as Katsuni, the new PORN'POP collection aims to use the narrative possibilities of the 9th Art to talk about sex in all its diversity under the mask of entertainment ", announced this summer's press release from Glénat.

The publisher of Titeuf then launched "PORN'POP", its new pornographic collection, with the title Petit Paul by Bastien Vivès. Accused of child pornography, the comic, released September 19, was removed from the Cultura and Gibert stores on Monday.

Be that as it may, two days after the release of the album, a petition was circulating claiming its withdrawal from the market. To date, it has more than 2000 signatures.

"Presented by its author as a humorous book, but wanting to be exciting based on his fantasies, Petit Paul shows the adventures of a 10-year-old child with a huge penis that will be used willy-nilly the women around him. We therefore question the relevance of releasing such a book. We want this book removed from the market and that Glénat publish an apology, or at least pay more attention to the content of what they publish, "says the anonymous DGREENE who launched the hostilities.

"This is a book exclusively for adults. We firmly and emphatically refute Petit Paul's accusations of child pornography," Glénat editions immediately countermand.

"As obscene and provocative as it may be, this work of fiction is never intended to play down, promote or legitimize the abuse of minors in any way whatsoever. It is a caricature whose design, deliberately grotesque and outrageous in its proportions, leaves no doubt as to the totally unrealistic nature of the character," adds the editor.

As for the principal concerned, Bastien Vivès, he assumes as always his unbridled imagination when he talks about sexuality: "It's a comic about uninhibited sex. It's clearly for adults and it's under seal. We are more in fantasy than in reality. And when I talk about my fantasies, I speak of course to be in the same situation as Petit Paul ... My thing is big breasts, not children ... This book is like a big joke, to make people laugh. Certainly not an apology for pedophilia."