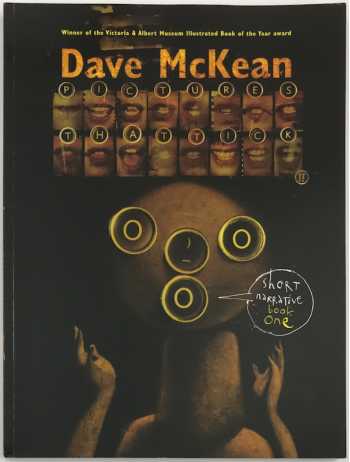 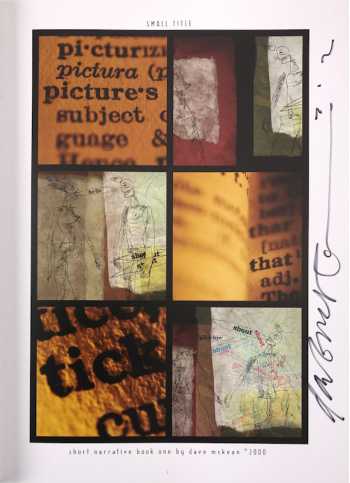 This is the 2009 Dark Horse paperback edition after the 2001 Allen Spiegel hardcover edition, out of print in all versions. This copy is signed by McKean on the first page.

Rediscover Dave McKean's lost masterpiece! Pictures That Tick is a collection of McKean's groundbreaking short comics stories from the 1990s and early 2000s. A true iconoclast, McKean mixes illustration, painting, photography, sculpture, and digital art for a comics experience unlike any other. Some pieces are poignant, some are silly, but all are beautiful and thought provoking. Each is completely unique, and gathered together they represent a tour-de-force achievement. A perfect companion to McKean's Cages, Pictures That Tick stretches the boundaries of comics art, and the short-story format in some ways allows him to create an even broader artistic vision.

After a trip to New York in 1986, during which he failed to find work as a comics artist, McKean met writer Neil Gaiman and the pair collaborated on a short graphic novel of disturbing childhood memories, Violent Cases, published in 1987. This was followed in 1988 by a Black Orchid miniseries (again with Gaiman) and Hellblazer covers for DC Comics. Beginning in 1989 he produced the covers for Gaiman's celebrated series The Sandman as well as all its collected editions and many of its spin-offs; and the Batman graphic novel, Arkham Asylum: A Serious House on Serious Earth, with writer Grant Morrison (1989). McKean has gone on to collaborate further with Neil Gaiman in both print and film.