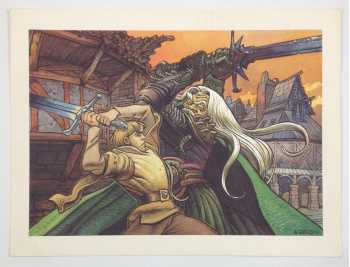 In 1997, Moebius contributed visual development art to the video game Pilgrim. This original lithograph was produced and given to journalists in the trade.

Pilgrim: Faith as a Weapon is a 1997 adventure video game, written by Paulo Coelho, who wrote The Pilgrimage, the novel on which the game is based. Pilgrim has been described as a "commercial cultural heritage game" and "graphic interactive fiction."