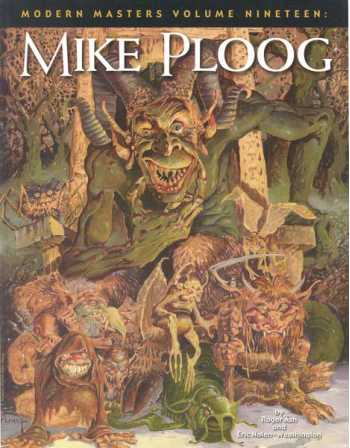 In the 1970s, horror comics were huge—and no one drew werewolves, swamp creatures, and demonic motorcyclists better than Mike Ploog! Though already well established in the fields of magazine illustration and animation, Ploog endeared himself to comics fans with his creepy yet beautiful artwork on such titles as Werewolf by Night, Ghost Rider, and Man-Thing. After an all too brief stint at Marvel Comics, Ploog returned to the world of animation and film, working on such classics as Ghostbusters, Ralph Bakshi's animated The Lord of the Rings, Dark Crystal, and Labyrinth. Now he's back in comics with the children's fantasies Abadazad and The Stardust Kid, as well as The Spirit, and proving he still has the chops. Roger Ash and Eric Nolen-Weathington proudly present a true Modern Master: Mike Ploog! This book features a career-spanning interview and discussion of the artist’s creative process, complete with both rare and unseen art, including an enormous gallery of commissioned work, and an 8-page color section!