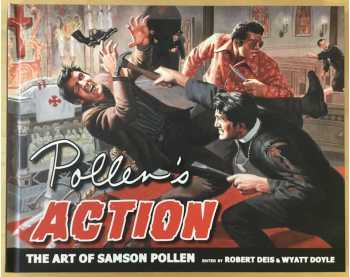 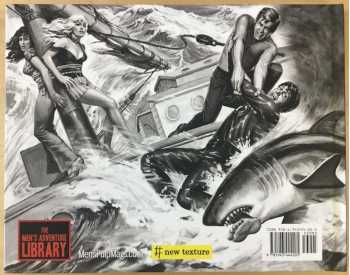 Illustrated on every page with original art and printed pages from men's adventure magazines of the 1950s and 1960s.

Pollen explains in this book, "my paintings are often at an angle, and twisted. Very few of my paintings are on a flat level, like a sidewalk or a floor. It's always tilted this way or that way, to get motion. Perspective gives you depth and motion, and I like motion.... You gotta get everything going in that one picture....You try to get a little motion out of it, and a way you can do it is with twisting and turning and all of that, to give it a little life.... That was always my objective, to keep it alive. Pulp action's supposed to be action, right? ... I like storytelling. A writer tells stories on paper with a pen, and I tell them with a brush. We're both doing the same thing in a different way."

The Men's Adventure Library follows the first-ever collection of Samson Pollen's illustrations, Pollen's Women, with Pollen's Action, a deluxe new volume collecting the cream of Pollen's high-octane action paintings. Includes history and commentary by the editors and an introductory essay by the artist.

A lifelong New Yorker, artist SAMSON POLLEN (1931-2018) established his career in the 1950s, creating lush, oil-painted covers for paperback potboilers by authors like Erskine Caldwell and Orrie Hitt. He concurrently worked as a pulp illustrator for men's adventure magazines (MAMs), contributing hundreds of illustrations over three decades and becoming one of the genre's most prolific contributors until the mags' eventual demise in the mid-1970s. He subsequently returned to paperback covers for the third stage of a long and varied career at the easel. A few key elements have defined the illustration art of Samson Pollen: He created tremendously effective presentations of action and movement, paired with an equally inventive approach to perspective that gives many of his images an immersive, 3-D effect. As a visual storyteller, he was adept as any author his paintings illustrated. And he had a particular gift for depicting all manner of memorable, physically appealing women.