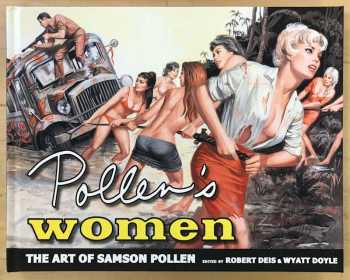 Illustrated on every page with original art and printed pages from men's adventure magazines of the 1950s and 1960s.

POLLEN'S WOMEN is a lush visual archive collecting some of artist Samson Pollen's most memorable pieces, selected from the hundreds of jaw-dropping illustrations Pollen provided for men's adventure magazines (MAMs) from the 1950s through the 1970s. Sexy women were a regular component of story illustrations published in the more than 160 MAM titles that flourished from the early 1950s through the mid-1970s, and nobody painted beautiful and dangerous femmes like Pollen. Much of the artist's work--literally, hundreds of pieces--saw print in the Atlas/Diamond group of MAMs from Marvel Comics founder Martin Goodman's Magazine Management Company. Until now, almost none of these illustrations have seen print since their original publication in those latter-day pulps. POLLEN'S WOMEN collects the artist's sexiest and most lethal female portraits in a deluxe hardcover edition, with an autobiographical introduction by the artist. Edited by Robert Deis and Wyatt Doyle for The Men's Adventure Library.

A lifelong New Yorker, artist SAMSON POLLEN (1931-2018) established his career in the 1950s, creating lush, oil-painted covers for paperback potboilers by authors like Erskine Caldwell and Orrie Hitt. He concurrently worked as a pulp illustrator for men's adventure magazines (MAMs), contributing hundreds of illustrations over three decades and becoming one of the genre's most prolific contributors until the mags' eventual demise in the mid-1970s. He subsequently returned to paperback covers for the third stage of a long and varied career at the easel. A few key elements have defined the illustration art of Samson Pollen: He created tremendously effective presentations of action and movement, paired with an equally inventive approach to perspective that gives many of his images an immersive, 3-D effect. As a visual storyteller, he was adept as any author his paintings illustrated. And he had a particular gift for depicting all manner of memorable, physically appealing women.